You are at:Home»News»NuAxis Innovations Receives Fantastic 50 Awards, Among Fastest-Growing Companies in VA 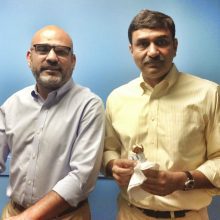 NuAxis Innovations received a Fantastic 50 Award and was named one of the fastest-growing companies in the commonwealth by the Virginia Chamber of Commerce on April 28.

Held at the Westfields Marriott in Chantilly, the 50 awardees were announced at the Fantastic 50 Networking Reception and Awards Banquet. The award is in its 21st year of celebrating entrepreneurial success and winners’ contributions to Virginia’s economic vitality. Based on four-year total growth rates, NuAxis is number No. 46 across all service categories.

“We are thrilled to be recognized as one of Virginia’s fastest growing companies,” company CEO Imran Akram said. “NuAxis has been expanding rapidly, and it is an honor to be included in the list with other successful businesses from around the commonwealth.”

“As we continue to grow, we are hiring the best of the best and hope to provide our services at an exponential rate to government agencies across the nation,” COO Raza Latif said. “We mapped out what we wanted to do, and then mapped out our growth to reach those goals.”

NuAxis was also named one of the largest government contractors and a top minority-owned business of 2015 by the Washington Business Journal and a Significant Mover by Govini this year. Leadership attributes the company’s growth to hiring the right people with the right potential over the last half decade as well as a focus on the maturation of back-office infrastructure and business development processes.