You are at:Home»Execs to Know»LGS Innovations’ Ray Ivie Talks Cybersecurity Workforce and Recent Acquisition of Axios 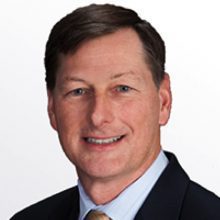 WashingtonExec: As a former U.S. Navy Captain, what are some of the unique communication needs and challenges within a maritime environment?

Ray Ivie: Communication challenges are not uncommon within a military environment and can range from limited bandwidth to electromagnetic interference. For the Navy, all of the challenges that the other service branches experience can be found on every naval vessel.

The nature of maritime operations requires a lot of electronics to be consolidated in a relatively small footprint. For instance, you can quickly run into problems with electromagnetic interference with communications antennae being located next to radars. These types of challenges are compounded by the various media through which you are transmitting and the domain – sea-to-air, sea-to-sea, sea-to-land, even sub-surface communications. There are times you want to communicate, times you don’t, and occasionally, times you can’t.

Because maritime operations are often global, spectrum-related problems can also arise. Depending on where you are in the world, there are different rules regulating the use of spectrum. While in U.S. waters, you follow one set of rules, when you enter European waters, another. Bandwidth allocations differ from the Persian Gulf to Norway to Japan – on one ship’s deployment, you might hit three or more different areas of responsibility, each with their own rules and norms. I served as a carrier Naval Aviator, but spent a great deal of time on other ships in staff positions and noted even the radar bandwidths and operational procedures changed based on the area.

LGS creates things that have never been done before and moves them into operation very quickly, often within the same year. Think of that – from physics to operations in a year. That makes a huge difference when supporting our leadership and our people in harm’s way – be they troops or members of the intelligence community.

WashingtonExec: Why did you decide to join LGS Innovations?

Ray Ivie: I was looking at several companies when a friend recommended I take a look at LGS. I didn’t know a lot about the company at first, but once I learned about their heritage – coming from Bell Labs – they had my attention. When I spoke with Kevin Kelly, our CEO, I was energized by his excitement about what LGS does. I love the idea that we are able to take an idea from inception and innovation all the way through operations. Often, what happens in R&D rarely sees operational use, and development to implementation can sometimes take decades.

LGS creates things that have never been done before and moves them into operation very quickly, often within the same year. Think of that – from physics to operations in a year. That makes a huge difference when supporting our leadership and our people in harm’s way – be they troops or members of the intelligence community.

WashingtonExec: What role will you be playing as the head of the Engineering and Integration Services (EIS) Group? What are your goals for the group in 2016?

Ray Ivie: EIS has traditionally handled communication services such as designing and integrating networks and moving data centers, but now we are also taking an increased role in managing the go-to-market integration of technologies coming from our Applied Research and Technology (ART) group.

I’m responsible for the profit and loss of the group. I’ve got a slice of everything to work on from setting financial goals, managing, staffing and internal R&D to business development.

One of my goals is to continue to formalize and advance our processes and procedures in integrating technology from our acquisitions and internal R&D and taking them to market.

WashingtonExec: You are also overseeing the division formed from LGS’ recent acquisition of Axios Engineering. How is the integration going so far? What do they bring to the table?

Axios’ organizational culture was a big factor in why LGS decided to acquire the company. It closely matches our own and as a result we’ve been able to retain virtually everyone through the transition.

Our customers have benefited from the integration as well. Axios’ operators have provided feedback to help our engineers better design and innovate for the mission. The operators in turn have been able to gain a deeper level of understanding of the technology they are using.

Additionally, with LGS hardware expertise and Axios enterprise and cloud framework expertise; both sides of the house are now in better positioned for our markets.

WashingtonExec: One of the biggest communication challenges the U.S. military is grappling with now is the shortage of RF spectrum, which is critical to wireless communications. How can the DoD ensure it has the spectrum it needs?

Ray Ivie: No one is creating any new spectrum, and that will not change — so we are at the mercy of the laws of physics. Governments are selling the rights to parts of the spectrum as a way to bring in income, and military spectrum bands are either in those auctions or reaching total utilization. That is why our investments in spectrum management are so important today.

Technologies developed over years under LGS Applied Research and Technology are being used by my group, Engineering and Integration Services, where we produce solutions that can help the government manage their spectrum more effectively. We can see what users are dealing with over time and dynamically to use the spectrum to their advantage.

For example, when interference is identified in one area, it allows operators to not only move to a different area where the spectrum is more open, but know what the spectrum will look like when they move.

WashingtonExec: Is there a shortage of cybersecurity professionals right now? How is this impacting the industry and what can be done about it?

LGS has been involved in cybersecurity for a very long time, and the role of cybersecurity professionals is broadening. In the past when you thought about cybersecurity, it was all about hacking. Now vulnerabilities exist everywhere. For example, we recently launched a solution to secure network component source code from vulnerabilities that may arise (intentionally or inadvertently) as part of the global supply chain.

So yes, with all of the new vulnerabilities that exist today and the whole internet of things, there is a significant shortage. Not only does LGS have to compete against the rest of the cyber market, but due to the security clearance process, we have a narrower set of clearable US citizens who we can even look at, making it even more of a challenge. Since it’s an area so vital to national security, I’d personally like to see more targeted scholarships in this area.

So we’re starting earlier. We’re creating more internships and fellowships and investing in STEM education to try to ensure the IT and cybersecurity leaders of tomorrow are finding and sticking to the right paths. It’s an important issue not only for LGS, but for the United States as a whole.