You are at:Home»News»Federal Government»Brad Carson Speaks to the WashingtonExec Federal Business Council on Military Personnel Reform 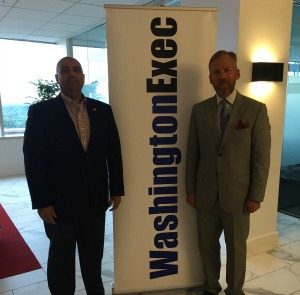 On June 17 WashingtonExec’s Federal Business Council hosted keynote speaker Brad Carson for a roundtable discussion in Tysons Corner. Carson has served as the General Counsel and Undersecretary of the U.S. Department of the Army and later was appointed as Undersecretary of Defense for Personnel and Readiness of the Department of Defense. Carson also previously served in the U.S. House of Representatives from 2001 to 2005. As Undersecretary, Carson introduced new reforms to personnel changes in both the military and civilian workforce, improved the military retirement system, and tackled opening combat positions to women. Carson left the Pentagon this year after withdrawing his nomination for a high-ranking position in the Department of Defense.

With his experience in the both the U.S. Army and Department of Defense, Carson provided insight on the processes of each department. Within the Department of Defense Carson advocated for a more balanced workforce between civilians, the military, and contractors. He also believes that contractors are best utilized when they deliver high-end solutions and skills rather than administrative or management needs. As the military continues to downsize, he believes that the DoD gradually rely on private contractors to best support the mission.

Although the Department of Defense has a long-term attention span on a single employee, Carson stated that they fail to place any success or failure on a single person. Carson continues to advocate for achievement through recognizing criticism and subsequently taking action.

Carson ended the program by urging attendees to support a change in the military’s recruiting process to include more personnel specialization in cyber security and believes that future of war will heavily involve cyberspace.