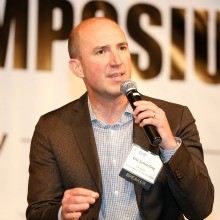 Vencore’s Eric Schierling, who served as an F18 Top Gun pilot, Speaker for the 2016 K-12 STEM Symposium on March 12th

WashingtonExec will feature former Top Gun pilot Eric Schierling at its 2016 K-12 STEM Symposium on March 12, at the Nysmith School in Herndon, Virginia. Schierling will participate in a discussion on the industry and government perspective for STEM entitled, “Workforce Needs and Solutions.”

The Symposium is a free, exciting, and all day forum that provides opportunities for students, parents, and teachers in the National Capital Region to interact with key business, education, non-profit, and government leaders involved in science, technology, engineering, and mathematics.

Currently a Director of Vencore’s Space Group, Eric Schierling will be featured in the opening presentation. Ed Swallow, Vice President of Vaeros at The Aerospace Corporation and founding chairman of the WashingtonExec STEM Council will moderate the discussion.

This year’s Symposium will highlight the advancements in space technology and the critical role of space exploration to our nation. Vencore is a Gold Sponsor of the Symposium and will provide a flight simulator exhibit.

Schierling’s interest in technology and engineering began early. As a boy he worked summers in his grandfather’s machine shop in Scranton PA, where he learned about machining parts for industrial equipment and commercial-grade heating systems.

At last year’s Symposium, Schierling served on a panel to discuss “Positive Messaging: Making STEM Cool for K-12 Kids.” He described how the time he spent with his grandfather in his machine shop during the summer piqued his interest in STEM.

“Whether it’s building a bridge or solving a disease that we as a society are able to solve, I walked away with a clear understanding that it provided me a confidence that I could go forth and pursue a position as a pilot,” Schierling said. “It’s that type of confidence that I would like my children to have going forward.”

Schierling studied electrical engineering at the University of Rochester with an NROTC scholarship and was later commissioned and “winged” as a Naval Strike Fighter Pilot flying the F/A-18 Hornet. He served for 13 years as a military aviator and flew many hours during combat operations in Iraq and Yugoslavia. He graduated from the U.S. Navy “Top Gun” Fighter Weapons School and the Strike Fighter Tactics Instructor course, was awarded two Air Medals, named the East Coast F/A-18 “Pilot of the Year,” and received the Nelson Leadership Award, among others. He holds a Master’s degree in IT Management from the University of Virginia.

On September 11, 2001, Schierling was a commercial pilot for United Airlines flying over Pennsylvania. The events of that day led him back into national service to support the intelligence and security challenges facing our nation.

Schierling is a native Washingtonian, who lives with his family in Ashburn, VA. He is active in the community and teaches classes, coaches sports, and participates in various community organizations.

Click here to see the complete schedule of all speakers. Sign up to attend the Symposium at www.stemsymposium.com.