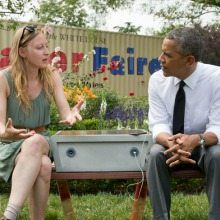 The White House will celebrate a “Week of Making” June 12-18, 2015, which will coincide with the National Maker Faire, held June 12-13 at the University of the District of Columbia.

The UDC event will feature makers from across the country and will include participation by the Dept. of Education, National Science Foundation, U.S. Agency for International Development, U.S. Small Business Administration, Institute of Museum and Library Services, National Institute of Standards and Technology, NASA, Corporation for National and Community Service, Dept. of Homeland Security and the Smithsonian.

The President announced a large number of commitments made by the federal government, mayors, educational institutions, companies and non-profit organizations to expand opportunities for engaging students in STEM through making, supporting makers who want to become entrepreneurs and making it easier for individuals to learn 21st century design and fabrication skills around the country.

On June 18 of last year, President Obama hosted the first White House Maker Faire and issued a call to action that “every company, every college, every community, every citizen joins us as we lift up makers and builders and doers across the country.”