You are at:Home»Events»Nextgov PRIME: With the Internet of Things, Every Soldier is a Sensor 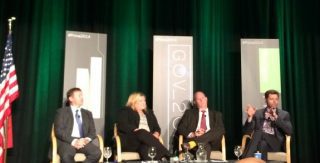 Fall 2014, Nextgov PRIME hosted a panel of experts to discuss The Internet of Everything and what this concept means for government. Patrick Tucker, Technology Editor at Defense One and author of “The Naked Future: What Happens in a World That Anticipates Your Every Move?” moderated the session. Panelists Beth Blauer of Socrata, Dan Doney of DIA, and David Mihelcic of DISA examined the inevitable convergence of mobile device proliferation, big data and cloud computing from technology and policy standpoints.

When it comes to the Internet of Things (IOT), “I think we are in uncharted waters, and I don’t know of any government that is really doing it right,” Blauer admitted. It’s sentiments like this that could cause some to “freak out” about what is to come. In fact, Tucker posed the following question to the panelists: “What is the level of “freakoutedness” on a scale of 1 to 10?”

Mihelcic said that “excited” would be a better word. “This is an incredible opportunity. Every soldier is a sensor, every soldier is 1000 sensors potentially, and the ability to take that data and do something useful is interesting,” he said.

However, this idea of every soldier being a sensor is a growing concern for those who want to protect war fighters in the field, as well as the missions they are undertaking. The space between commercial applications and the consumer mindsets that go with them — and protecting soldiers from the vulnerabilities these technologies create – is a space we are just now exploring, yet it is crucial to balance the two.

Doney offered the example of allowing applications to access your information, including your location, before loading onto your smartphone. While giving access to this data can be beneficial to the user (for example, helping Google to map traffic), it could also bring unwanted advertising and privacy concerns to the commercial user.

For the soldier using similar applications, the consequences could be much more severe. “If our soldiers are all equipped with commercial mobile devices, and those are disclosing their locations, there is an extreme sensitivity, an organizational sensitivity, and a mission vulnerability associated with that,” said Doney. “Our focus as we move forward with IOT is that, indeed, every soldier is a sensor, so soldiers represent a thousand sensors — how do we maintain not only the individual’s right to privacy, but also organizational security?”