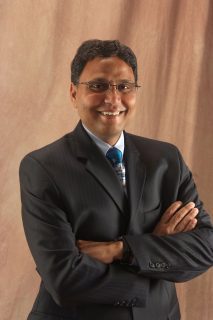 According to a study conducted by Dan Gordon, the former Obama official who is now Associate Dean for Government Procurement Law at George Washington University Law School in Washington, formal protests of government contract awards rarely result in a reversal of those awards. And yet the U.S. Government Accountability Office received almost 2,300 protests in 2013, up by more than 1,000 in the past decade.

No one understands the impact of these numerous protests better than small businesses whose success – and sometimes existence – depend on the pipeline of contract work flowing their way. Zantech is one such business that provides IT and engineering services to federal government and military clients.

WashingtonExec recently spoke with Zia Islam, Zantech’s President and CEO, about the impact of protest from a financial and planning perspective on small businesses, as well as a number of other timely issues facing government contractors.

The Impact of Protest

When contract work is delayed due to protest, small businesses pay the price. “Protest causes delays and uncertainty, which costs real money,” said Islam. “Companies plan to perform contracts based on schedules, often hiring and staffing to meet the needs of the contract. As a result of protest, companies have to lay off their staff or incur additional costs until the protest has been resolved.”

Islam and his team have experienced these costly delays firsthand, even in situations where they won the contract. “The process of protest and reevaluation has delayed and endangered our chances of having a contract available for Zantech to work on,” he said. “At the end of the day, protests carry uncertainty both for winners and losers, and it forces resource expenditures for both.”

Another challenge facing contractors as they bid on projects is the extended timeframe of acquisition cycles, which causes additional expenditures for companies. “A long delay between the final Request for Proposal (RFP) and the draft RFP causes uncertainty related to potential changes,” said Islam. “If changes are necessary, the work investment may be lost if the draft and final are very different. An extended proposal evaluation process translates into uncertainty associated with business planning and resource allocation.”

According to Islam, the extended period of waiting, produced by lengthened acquisition cycles, puts a kink in companies’ productivity, as they wait to find out whether work can proceed. If work cannot proceed, they must change directions quickly to seek out additional projects.

“To be honest, companies invest a significant amount of time and effort in assembling a team and dedicating a staff to respond to proposals and build their plans based on Government-provided schedules of when that contract will be awarded,” said Islam. “But missed schedules and the resulting inefficiencies in the process result in additional costs.”

These delays not only affect current projects, but they also impact the company’s long-term productivity. “A company’s ability to efficiently allocate resources is affected because you don’t know when the contract is going to be awarded,” Islam said. “It is a long cycle, and a company cannot afford to keep resources on the bench indefinitely. This situation affects employees’ opportunities for growth and challenges, too. Sometimes they leave to pursue other opportunities and this adversely affects our ability to continue to grow our company.”

“At the end of the day, longer acquisition cycles mean uncertainty which, in turn, costs more money.” 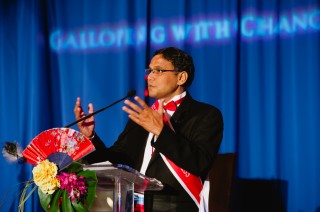 Another issue that we touched on during our conversation with Islam was low price technically acceptable (LPTA) procurements and their impact on small businesses. This issue is an additional hurdle to surmount for many in the government contracting industry.

“LPTA is detrimental to all businesses as it forces them to reduce their prices to the point at which they endanger quality performance on the program,” said Islam. “It can also force companies to eliminate experienced staff in favor of less experienced staff because you have to reduce costs to be competitive. At the same time, LPTA drives companies to reduce salaries, which negatively impacts the morale and productivity of  the government contracting workforce.”

Islam is clearly concerned about the effects of LPTA on his company, but his concern extends to the industry as a whole as well. “The long-term impact of this would be a reduction in the availability of skilled and experienced workers in the government,” he said. “This also restricts a company’s motivation to invest in development of their staff and train them for the long-term. As salaries rise for these increased skill levels, it becomes more difficult to bid and win LPTA procurements.”

According to Islam, the future of LPTA does not look bright.

“The drive to reduce prices negatively impacts the skill levels and experience that companies can deliver and adversely impacts government operations.” 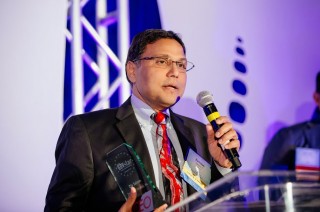 Zia Islam at The GovStar Awards, 2013

A Passion for Education

When he isn’t busy running a successful contracting company and meeting the numerous challenges facing his industry, Islam shares his passion for education and for helping people who aren’t able to afford post-secondary school.

“I firmly believe that education empowers the mind and uplifts the society,” said Islam. “It enhances the dignity of human beings and increases self-respect.”

Islam’s passion comes from his own life experience of witnessing the transformative powers of education. “Growing up in India, I realized that the inability to obtain an education crushed the hopes and shattered the dreams of many friends that I knew,” he said. “They were not able to go to school for post-secondary education; to be honest, I was blessed that somebody helped me to continue my education.

At that time, I decided that if I am fortunate enough that one day I would like to set up a charitable organization and a scholarship fund at various universities to help those who are not as fortunate.”

“I personally believe that education is the backbone of society, and I want to do everything in my power, to work hard, to make sure one day that I can help those who are less fortunate. I don’t want them to lose their dreams of the future.”

As an IT company CEO with a passion for education, it’s not surprising that Islam has some innovative ideas for enhancing STEM education. We asked him what he would like to see in our education system, as it relates to these issues.

“I am an engineer and I work in IT right now, but I’m a huge supporter of getting STEM education in our schools as early as possible,” he said.

“I believe the earlier we start implementing STEM into the lives of our youngest students, the brighter our future as a society will be.”

“We can start implementing a STEM curriculum when children are in kindergarten, at a very young age,” Islam explained. “By doing very small STEM projects, kindergarteners can build an awareness of the STEM subjects. They can focus on math, science and engineering with increasingly difficult projects as they increase in grade and age. It will help them develop an interest in this.”

Companies like Zantech can also play a role in building interest for, and skills in, STEM subjects among young people. “We have worked with NASA and developed a website called SOLC: Space Operations and Learning Center,” said Islam. “It is developed for kids so that at a very young age, rather than playing video games for entertainment or to just pass the time, they can go to the NASA website and learn about space, gravity, the Earth and different planets through gaming. Kids love games and they want to play. By visiting the SOLC, which is geared toward STEM,  they are challenging themselves in technology and science.”