You are at:Home»Execs to Know»Exec Moves»Leidos Appoints Michael E. Leiter as Executive VP for Business Development and Strategy 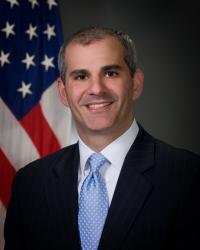 Leidos Holdings, Inc. (Leidos) today announced it has named Michael E. Leiter as the company’s new Executive Vice President for Business Development and Strategy. Leiter will begin his role at the Reston-based company on November 17, 2014.

Leiter will be responsible for business development, strategy development and execution, government affairs, acquisition activities and communications and will work out of Leidos’ headquarters in Reston, Va.

Most recently, Leiter worked for Palantir Technologies, a firm specializing in data analysis software, as counselor to the CEO. In this role, he was responsible for developing and optimizing market strategy, business practices and internal operations. He also managed Palantir’s engagement with government and commercial cyber clients.

Leiter also previously served as director of the National Counterterrorism Center (NCTC), where he was nominated by President George W. Bush and sworn in on June 12, 2008 after serving as the acting director since November 2007. Leiter was one of the few national security officials who was asked to continue in his role by President Barack Obama in 2009, where he continued to serve until July 2011.

“We’re excited to welcome Michael to the Leidos team,” said Roger Krone, Leidos CEO. “He brings an impressive background and strong track record of strategic, operational and industry expertise to Leidos. He will add significant leadership bench strength to our management team and will help our business development efforts build momentum moving forward. He has demonstrated his ability to develop and lead critical organizations in both the government, intelligence and commercial spaces – his in depth industry knowledge and passion for the work that we do will help us continue to increase our strategic focus, and ultimately better serve our customers.”

While working as director of the NCTC, Leiter headed up the primary organization in the U.S. government for analyzing and integrating all terrorism intelligence. He reported directly to the President in conducting strategic operational planning for government-wide counterterrorism activities, including integrating U.S. military, intelligence, financial, diplomatic and homeland security counterterrorism efforts. In this role, he management more than 1,000 employees and an annual budget of more than $400 million, and he advised the Office of Management and Budget on how to allocate more than $100 billion annually for counterterrorism activities.

Prior to his role at NCTC, Leiter was the deputy chief of Staff for the Office of the Director of National Intelligence (ODNI). He also helped to develop national intelligence centers, including NCTC and the National Counterproliferation Center, and helped to integrate them into the larger Intelligence Community.

“I couldn’t be happier to join the Leidos team and I look forward to working with the operating groups to develop and execute strategies to accelerate the growth of the business,” said Leiter. “Leidos offers unparalleled opportunities for business success as we tackle some of the toughest challenges facing our nation and world – from health care and energy to national security.”

Before working at the ODNI, Leiter served as the deputy general counsel and assistant director of the President’s Commission on the Intelligence Capabilities of the United States Regarding Weapons of Mass Destruction (the “Robb-Silberman Commission”), as an assistant United States Attorney for the Eastern District of Virginia, and as a law clerk to Associate Justice Stephen G. Breyer of the Supreme Court of the United States and to Chief Judge Michael Boudin of the U.S. Court of Appeals for the First Circuit.

Leiter was also a U.S. Naval Flight Officer from 1991-1997, during which time he flew EA-6B Prowlers and participated in U.S., UN and NATO operations in the former Iraq and Yugoslavia. He earned his J.D. from Harvard University, where he was president of The Harvard Law Review, and his B.A. from Columbia University.