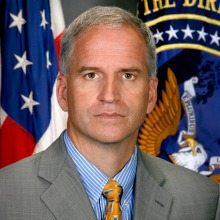 The National Geospatial-Intelligence Agency held a ceremony Oct. 3 to inaugurate Robert Cardillo as the new director. The ceremony took place at the agency’s Springfield, Va. headquarters.

“I can’t be more excited about the opportunity we all have to build on a legacy of helping our customers succeed and take NGA to new heights of service to the nation,” Cardillo said.

Former director Letitia A. Long will retire after 36 years of federal service. Cardillo previously served as the deputy director for intelligence integration at the Office of the Director of National Intelligence.

Another of Cardillo’s previous responsibilities was the President’s Daily Brief — a role President Barack Obama mentioned in a recorded address played during the ceremony.

The President also thanked Long for her service.

“We’ve been lucky to have someone as extraordinary as Director Long at the helm,” Obama said.