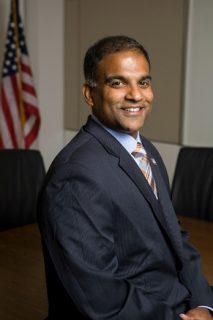 Technology trends come and go, but the concept of agility has graduated from trend status to one of the tenets of business success in recent years. Ironically, this mainstay is all about changing and adapting to the environment, which is subject to shifts in federal spending, technology innovation and new entrants to the marketplace.

Sujey Edward, vice president of the Agile Center of Excellence at Salient Federal Solutions, recently spoke with WashingtonExec about agility and how companies can leverage it to remain responsive to industry changes and customer demands.

Edward has spent 17 years in the software development field, beginning his career in testing, then moving on to configuration management and project management. Before joining Salient, he worked on a project that applied the typical waterfall method, where the company developed requirements, and then – after a couple years of work – a software solution was delivered to the client. Back then, that was considered a successful project. “We had a big party, everything was going great, and everybody enjoyed the success of delivering a successful project. Then, we found out that the users weren’t using the product and had reverted back to paper,” said Edward. “So my boss at the time sent me down to the client site and said, ‘Go investigate and figure out why they’re not using the system.’ And what I realized, really quickly, was that we had built the wrong system.”

A light bulb went off, and Edward set out to find more iterative approaches to developing software. “I started doing the Rational Unified Process years ago and then when Agile came out, I was really drawn to it—I mean, the faster feedback loops, the quicker time to market, the quality that was being built in—it just really became something that was addictive for me. I have spent the last seven years doing Agile development projects that are different sizes and locations and complexities and everything else you can imagine,” he said.

To make Agile solutions an easier pill to swallow, Salient Solutions packages the methodology into a tidy solution called Agility as a Service. “There are a lot of different parts of the organization that need to synthesize so that you’re moving in the same direction,” Edward said. “In the past, you’ve seen IT organizations in one silo, businesses in another silo, the C-level execs trying to manage those things, and procurement shops in their own silo. With Agility as a Service, we’re going to help align your development teams to your vision and to your business values while we make sure your core values are being addressed through IT. We’re going to help you bring the right types of expertise in to be able to help your development teams, to be able to help your business folks, to be able to help your contract folks, and to be able to improve with the agile method. Lastly, as you are moving forward through this evolution of becoming a better organization, we’re going to make sure the team is aligned to drive toward that business solution.”

Improving your organization can be an arduous project in and of itself, whether you’re at the top of your industry, on the bottom, or somewhere in between. We asked Edward to describe the challenges that most frequently confront firms as they move to implement agile software.

“Culturally, you really have to ask yourself if you really want to improve. And if you don’t, it’s easy to say check the box that says, ‘we’re doing great’ or ‘we’re doing wonderful and there’s nothing better that we can do.’ But it takes an organization that’s really motivated to say, ‘we want to get better and even if we’re at the top, we’re going to get better.’ That type of culture has to be ingrained inside of the organization; it can’t just be, ‘I’m going to come in and punch my clock and then leave.’”

Besides the challenge of sustaining motivation, companies also face a constantly changing technological landscape. “We used to build software to last and now we build software to change,” Edward said. “When you adopt Agile methods, even though people will look at it as a soft art, there are a lot of technological things that you want to accomplish to make sure that you’re ready for that change. If you’re using service-oriented architecture or things like that, you want to be able to build your system so that as your user community changes, you can change, too.”

Today’s government contracting market is not what it was 5-10 years ago. The federal government’s needs have changed, and organizations are being asked to achieve more at a lower cost.

Often companies question what they are actually going to purchase when a contract includes Agile methodology. “Here at Salient, we’ve got contract folks who have figured out a great way that we can still stay true to the Agile methods and deliver Agile projects, but at the same time, give firm fixed price Agile to our customers,” said Edward.

Adopting agile solutions won’t help your company predict the future, but it can help you adapt more quickly to whatever comes next. We asked Edward what he thought would be next for the agile industry.

“What’s interesting is that we’re building things a lot faster and we’re building things at a higher quality, so you’ll need a method for continuously delivering that,” he said. “In this space, over the next few years, you’re going to see a lot of DevOps-type solutions, things moving from development to operation in a very quick way. So for us, living in this area, security is a big thing; you have to have security baked in, you can’t have it frosted on.”

Besides keeping security front-and-center, Edward believes companies should focus on their customers, whose needs will continue to evolve quickly in the future. He says you have to consider how to deliver software to the end-user with responsive web designs that engage a variety of demographics, regardless of their device of choice. “My kids have never used a laptop, yet I only use a laptop,” he says. “I don’t have a PC, and my kids only use the iPads. So, how do you get your information to your users, and how are you building that?”

Another challenge, which could actually be viewed as a benefit, is the continuous feedback companies receive from their customers. This feedback can be harnessed to make products and services more responsive to customer needs, but keeping up with the influx of information can be tricky.

“Gone are the days where you just do a survey and say we’re great, thumbs up to us,” said Edward. “You need that continuous feedback, not only from your user community, but you need to know what they are using, which parts of the system they are touching, and how they are using the data.”

Customers aren’t the only ones providing this wealth of feedback; your systems have a lot to offer, too. From server performance to your services and programs, your systems are constantly telling you how well they are performing and whether modifications are necessary. “You get this enormous amount of data coming from your systems and coming from your user community,” Edward said. “How are you going to look at that data, and how are you going to improve your system for your user community?” These are the questions that can lead you toward agility.

For now, the Agile movement is not slowing down. And, the business and IT industries are better for it. “What we saw a few years ago — and what government wanted to get away from — was these five-year, huge contracts, where they didn’t see their first piece of useable code for two or three years,” Edward said. “Agile methods have helped to shorten lead times up to two weeks; now we can build some code and test it out really, really quickly.”

“The government said, ‘we want six-month increments or six-month releases so we can judge how this product is going, if it’s the right process, and what type of useable code we’re getting,’” he continued. “So we saw that, and now we’re starting to see procurement shops and businesses starting to look more aligned, and instead of saying, ‘you will specifically deliver ABCD,’ you’re starting to see them look at business objectives and business values for us to achieve through software.” To borrow a reference Edward used above, agility is becoming baked into the business ecosystem, not merely frosted on.

According to Edward, Agile solutions aren’t just for the workplace. “Something that most people don’t know about me is that I’m a high school basketball coach in my free time,” he said. “I’ve coached a varsity girls program for a number of years, and now I coach a varsity boys program for a small school in Maryland. I actually use some Agile techniques with the kids there, it’s a fun bunch of kids, and we have a great time playing basketball!”