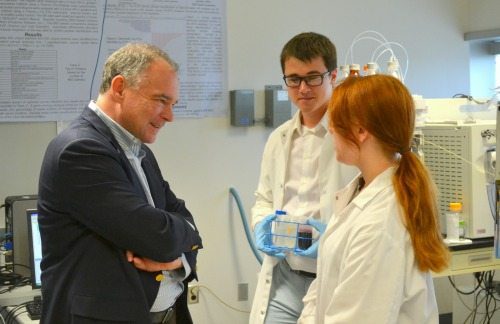 We’re all familiar with the narrative: the U.S. trails its competitors in its overall level of STEM proficiency due, according to most, to disinterest in STEM.

What’s more, a 2013 Brookings Institution study finds that 20 percent of current jobs require a “high level of knowledge” in at least one of the STEM fields – suggesting familiarity with STEM touches more areas of the economy than we would normally believe.

The bottom line is that all industries incorporate some type of data and technology analysis, which makes STEM proficiency relevant in most fields, whether we realize it or not.

For Tim Kaine, the democratic senator of Va., the key to ameliorating the issue is to cultivate an appetite for and understanding of advanced career and technical education in students while they’re still young.

“It is a serious problem and the problem begins before people are getting degrees, and for that reason the solutions have to begin before people are getting degrees,” Kaine told us in a recent interview. “The key is to try to come up with teaching methods earlier in a child’s academic career that generate enthusiasm for STEM disciplines and, if you do that, that is how you’ll ultimately improve the pipeline of STEM graduates.”

Kaine, who served as the 70th governor of Va. from 2006 until 2010, in 2013 launched a Career and Technical Education (CTE) Caucus in the Senate with Sen. Rob Portman (R-OH) aimed at amplifying the discussion on the importance of career and technical education.

Why? Because encouraging STEM proficiency is essential to the country’s economic success.

“The winners in today’s global economic competition will be the societies that best raise the talent level of their populations, which is why it needs to be primary public policy for us to make sure that individuals have the best sets of skills for the workforce needs,” Kaine said. “A renaissance of career and technical education beginning at the earliest levels — in elementary schools is going to be one of the best paths toward getting more and more people excited about lifelong careers in STEM fields.”

Career and Technical Education
Kaine’s investment in education didn’t begin with his career in the Senate, though.

The academies aimed to generate enthusiasm in STEM disciplines by preparing students for applied work in areas dependent on the aforementioned “high level of knowledge” in at least one STEM field, regardless of whether or not they planned to attend college afterward.

For one participant who had a history of underperforming in STEM, the program showed him how he could apply scientific knowledge to emulate the EMT heroes in the reality TV shows he enjoyed.

“Not only was [the student]over at the career and technical academy learning how to be an EMT, but suddenly he understood why biology and chemistry were important,” Kaine said. “I think if we give students at a younger age applied career and technical opportunities, they’ll understand how these subject matters really have meaning in real life, and it will help students at a younger age get excited about STEM disciplines.”

Countering the Stigma
While the program has enjoyed steady success – former Gov. Bob McDonnell doubled the number of existing academies from eight to 16 during his term, and today there are 23 – its proponents continually battle a stigma against the idea of career and technical education.

“They have a hard time getting kids out of high school to go into this very technical discipline because there’s been a perception that vocational education is sort of a second class kind of an education,” Kaine said. “The biggest obstacle that we’re finding is a continuing cultural view that vocational, or career and technical education, is sort of second class and not quite the same thing as going to college, when in many instances it’s as good or better.”

Kaine said the career path is one that suits some students better than others.

He and Portman have introduced various pieces of legislation aimed at channeling funding to career and technical education in line with the Carl D. Perkins Career and Technical Education Improvement Act re-signed into law in 2006.

The CTE caucus they launched in 2013, which is co-chaired by Senators Tammy Baldwin (D-WI) and Mike Enzi (R-WY), aims to counter the stigma and strengthen access to CTE.

“We think it’s a good path to lead more people into STEM jobs and STEM careers,” he said.

Ultimately though, it will be necessary for us to expand the definition of what it means to work in STEM.

Related: SAVE THE DATE: WashingtonExec STEM Symposium 2015 Set for March 7, 2015