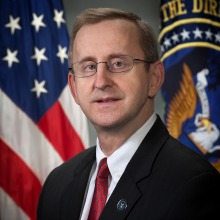 When in 2006 Barry Zulauf spearheaded the creation of an intelligence arm for the Drug Enforcement Administration (DEA) within the intelligence community (IC) – the 17th and final IC member addition — the IC faced a cocktail of a problem:

Its 17 independent agencies – each tied up in their own problems and armed with specific personnel and resource management systems and ways of doing business – were disjointed and resistant to cultural change in a U.S. hardened by constrained budgets and the emergence of a new world order.

And while the post 9/11-founded Office of the Director of National Intelligence (ODNI) aimed to address the disjointedness from a broad scale, the problem — according to Zulauf — needed to be grappled with from the trenches.

Zulauf, the first ODNI Chair on the Faculty of the National Intelligence University (NIU), today approaches the cultural resistance to change within the IC by delivering graduate curriculum seminars to the next generation of intelligence professionals.

“The future needs to be all about an integrated intelligence community providing intelligence services that are relevant to the wants and needs of policy makers and other customers,” Zuluf said in a recent interview with WashingtonExec. “We have to become leaner, more collaborative, and more of a service organization that is relevant to our customers.”

The University’s ‘Leadership and Management of the IC’ graduate certificate applies best practices in leadership from industry, business schools and government to real-world intelligence community issues.

“What we do in the certificate is to give rising leaders from this generation the tools they will need to diagnose their organizations, envision fundamental change, and put into place achievable transformation plans to make their organizations more integrated,” Zulauf said.  “This is sort of a subversive approach, but we are all about equipping a new generation to fundamentally alter the way the IC works today to enable it to meet the challenges of declining resources and an ever-shifting threat.”

Zulauf’s message? Change or die. His “top secret classroom” brims with “rising leaders from all across the IC” who gather for a period of four weeks during the year to build bridges and break down cultural barriers.

“I like to think we are raising up a new generation of leaders who can take the tools we give them and go back to their own organizations, diagnose them, develop a vision for change, and implement a rational plan how to reach that vision,” Zulauf said. “This is transformational leadership.”

That’s not to say the IC hasn’t always attempted to evolve with the times.

Zulauf graduated from Indiana University with a Ph.D. in Soviet Foreign Policy in the Third World —  “a subject nobody cares about anymore,” but that taught him to “think, write and speak clearly,” he said – at a time when the U.S. touted a near monopoly of information on its Soviet enemy.

He recalls having to maintain six to seven badges on his person to be able to go where he needed to go within the IC to complete his work when he first joined Naval intelligence in the 1980s.

“Now, especially since I retired from the Navy, I only have one.  That may seem like a minor matter, but it illustrates the pace and direction of change,” Zulauf said. “We’re more closely stitched together today in a way that wouldn’t have been possible 10 years ago – some of it is technology,” he said but cautioned that “technology is not the problem” impeding integration.

‘The End is Near’

The problem comes instead in the challenge to remain relevant as an intelligence community by determining which information to ignore in a data-laden world. And the group can only attain such relevance, Zulauf said, if it integrates itself.

“We certainly don’t have a monopoly on information about the enemy now, and in some ways may not even have the best available information at all,” Zulauf said. “Our challenge is going to be in keeping relevant.  We need to make sure that the services we provide are really worth the billions of dollars they cost – especially as compared with other essentially free sources of information in this increasingly wired world.”

“We can have access to a stunningly broad array of information and can apply our long term expertise and perspective to isolating what in that mass of data is most important,” he said. “We just have to learn how to be flexible about doing things, not clinging to old ways. The problem might be unwillingness to use or trust the tools.”

How? Zulauf is working from below to instill within his students a sense of urgency.

“[It’s important to make] every one understand that they are standing on a burning platform now, and change – even flying in the face of current departmental rules – is an existential imperative.  If we don’t change, we will die,” Zulauf said. “We have a long way to go with sinking Integrated Mission Management into the culture, because of organizational cultural resistance.  If we can continue to give the new generation of leaders the tools they need to do the job, we will be able to succeed.”

For the IC to continue to carry out its mission, then, it will have to attract incoming leaders willing to adjust their work culture with the job as it changes.

“That kind of work is just easier to do on the outside.  Millennials will just come to expect that,” Zulauf said, but noted he’s concerned that the same clandestine features which position the IC to pursue its mission will sabotage its attempts to recruit top millenials.

With millenials set to comprise 46 percent of the workforce by 2020, those differing cultural norms exist as an impeding threat.

“I am concerned that, especially since we can’t compete with compensation, the lack of being sufficiently plugged in will keep away the best talent, or prevent us from retaining the talent we already have,” Zulauf said.

That again is how revamping the IC to capitalize on its specialties will ensure it stays relevant as an agency and a potential place to work.

“None of us are here for the money alone. The opportunity to work our mission, to be certain that we are one of the good guys and are helping to make the world a safer place, that is more what drives us.”

In the end, Zulauf said, there will be resistance to integration as long as the IC sees itself as a collection of 17 independent agencies.

“We’ll know we have changed the culture when we think of ourselves first as two letter intelligence professionals – IC officers – rather than three letter professionals, DEA or NGA or FBI or whatever. Reality will force us to be smaller, more agile, collaborative as our first instinct – not just when we absolutely have to.   Technology, be it communications, data display, virtual collaboration, will help make that happen, but the real change has to be in the culture,” Zulauf said, and re-emphasized the importance of sharing.

“I have hopes for the rising generation that it will be able to stitch together the IC from the bottom up.  They will have spent their entire professional lives sharing, and understanding that we cannot succeed without sharing.  When they have risen to leadership roles, they will be in a position – I hope – to effect changes across agencies and potentially across departments that can take us from a collection of agencies to a single, integrated enterprise.”