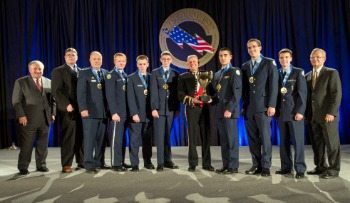 The winning team and coaches of the National Champion title for the All Service Division at the CyberPatriot VI Finals Competition in March, 2014. The team, the “Fearsome Falcons,” hails from Clearfield High School in Utah.

The contest launched this year in November and pitted 1,600 teams against each other in a race geared at arousing youth interest in cybersecurity and STEM topics.

The 28 teams were tasked in order to win in the finals competition to most efficiently defend virtual networks and mobile devices from professional aggressor teams.

“CyberPatriot is generating a strong and consistent flow of students interested in STEM and cybersecurity,” Evers-Manly said. “Our partnership with the AFA is making a difference in career choices. We’re now seeing a whole new generation of qualified cyber pros ready to take on the challenge of securing our digital future, a national security priority that grows more critical every year.

The competition overall drew 1,566 teams and touted representatives from all 50 states.

For more information, or to register a team for CyberPatriot VII, click here.