You are at:Home»Execs to Know»Michael A. Daniels Discusses New Book, ‘The Monetization of the Internet’ 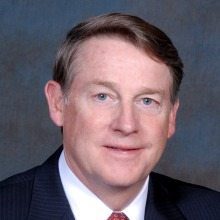 Daniels and Science Applications International Corporation (SAIC) founder, Chairman and CEO J. Robert Beyster collaborated to write the book. It offers a glimpse at future challenges to be addressed through the eyes of those who navigated the uncharted waters of Internet security, privacy, social networking, politics and policy during the exponential growth of the World Wide Web in the 1990s.

Daniels retired from full-time work at SAIC in 2004. He serves on the board of directors of CACI International, Mercury Systems, Acentia and Shared Spectrum, as well as the Northern Virginia Technology Council (NVTC), the Virginia Chamber of Commerce and the Boy Scouts of America National Capital Area Council. He also serves as chairman of the Logistics Management Institute (LMI), Invincea and GlobalLogic.

Since 2004 Daniels has invested in high growth-technology companies and served those companies as chairman, CEO and/or a board member.

Inspired by Beyster to write the book, Daniels said that without Beyster’s approval the story would never have come about. The book discusses Daniels’ idea to acquire Network Solutions, Inc.

“We wanted to write this story so a broader worldwide audience could understand the history of the Internet, the key role NSI played as the exclusive seller of domain names to every person and organization on earth and our thoughts about the future of the Internet,” Daniels said. “Without Network Solutions keeping the DNS core infrastructure running seven days a week, 24 hours a day, nobody could get on the Internet and access any websites or information. We also share the lessons we learned for all entrepreneurs for building great companies in the future.”

In the next 10 to 20 years we will see the Internet wave continue. No one knows how this will ultimately develop — no one.”

After the $4.7 million acquisition of NSI, Daniels served as chairman and CEO. The company was taken public in 1997, with three public offerings, he said, raising $3.2 billion. In 2000, Network Solutions was sold to VeriSign at the height of the Internet boom for $19.3 billion.

“In those 10 years I have worked with extraordinary teams of technology people,” said Daniels. “We have sold six of those public and private companies, which have included venture-backed and private equity deals. These companies have been Apogen Technologies, Mobile 365, Initiate Systems, Sybase, GlobalLogic and KTSI, and returned billions to shareholders.”

For nearly 40 years, he worked to create shareholder value through IPOs and private sales. As a senior executive at SAIC in the 1980s and through the mid-2000s, Daniels said he and his colleagues built SAIC from $500 million to $8 billon in revenue with 42,000 employees worldwide.

Daniels spoke a bit about trends and shifts with respect to the Internet. A great believer in major technology waves, Daniels said that he was at ARPA in 1969 when the Arpanet became operational and was in one of the very first user groups for the Internet. It took almost 25 years for the first commercial IPO in the Internet industry, he said, noting that major technology waves are massive, take years to develop, disrupt companies and industries and create and destroy trillions of dollars of investor funds.

“In the next 10 to 20 years we will see the Internet wave continue,” Daniels said. “No one knows how this will ultimately develop — no one. My belief is that the layering of the mobility technology wave on top of the Internet infrastructure coupled with the ongoing digitization of the world — will be the major shift.”

If you are in business and do not understand this significant technology wave and how it can put you out of business — you better wake up.”

Daniels said that in the next five years, he’d like to see Internet innovations focused on helping the public acquire good jobs and create significant economic activity for the United States. He acknowledged that the Internet has many sides and faces, both good and bad.

“As an Internet pioneer in this business, my hope is that the United States and our people turn much more attention to how to make the Internet and the new technologies added to it help us create significant economic growth — which we really need,” Daniels said. “I would encourage all our great entrepreneurs in the Washington region to think hard about how they can be part of this for all our citizens. We have a significant and growing global competitive problem and I believe it is up to us in the technology community to lead the way!”

Daniels also spoke about the commercial landscape prior to the shift to the Internet in the mid 1990s, and said it was one of limited connectivity and limited everyday use of computer resources for the vast majority of people.

“We in the business and technology communities had used increasingly sophisticated hardware, software and communications networks for years,” he said. “Since the mid-1990s and the dotcom boom, the Internet has become ubiquitous and billions of people around the world now use and depend on the Internet for access to every type of information. The biggest shift I see is the addition of billions of users to the Internet and the serious and unending competitive impact of the Internet on traditional business models that have not been able to transition to the ‘digitization of the world.’ If you are in business and do not understand this significant technology wave and how it can put you out of business — you better wake up.”

Daniels said that in 2014, the major stakeholders in the Internet are many and found in diverse communities. Stakeholders, he said, are the entire global online population as well as businesses in every sector globally, impacted or to be impacted by the progressing Internet wave. They are also governments and organizations such as the ITU, UN and EU that continue to want more say over Internet governance now in the form of ICANN, he said, as well as major technology and communications companies that are the core infrastructure providers.

When asked what he knows now that would’ve been helpful when he first started his career, Daniels reflected on the need to hire the smartest, hardest working, most honest and ethical people on earth in order to build great companies.

“They have to be laser-beam focused on a core mission of being number one in their global high-growth niche and never give up, no matter what the obstacles,” he said. “I had to learn this on the job for many years to truly understand.”

Daniels learned that lesson, he said, through the best school of all — running and building businesses for almost 40 years — in the arena and on the battlefield.

He noted, “If you pick the right people, technology and key growth market sectors and become number one, two or three in these niches — you will be very successful.”