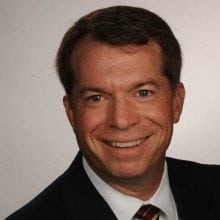 ECS Federal, Inc., a professional services firm with clients in the federal defense and civilian agencies, has named George Wilson Chief Executive Officer (CEO). Wilson has served as President of the organization since January 2012.

Roy Kapani, ECS founder, owner and former CEO, will maintain his role as Chairman of the Board.

“Since arriving, George has worked with me and the executive team to put in place the people, processes, culture, and vision to allow ECS Federal to meet our strategic objectives and become a recognized leader in the Federal services marketplace,” Kapani said.

“I have personally known Roy for nearly 20 years and I am honored to have this opportunity to continue to work for Roy and to lead a great organization and a talented team of professionals,” said Wilson.

ECS Federal projects it will obtain over $250 million in annual revenue this year, according to the company’s press release.

“George’s promotion is a win-win and a recognition of the significant contribution he has already made to ECS.  He’s been the supercharger placed onto what was already a hot-rod company to accelerate their successful progress through the mid-tier.  Congratulations–it couldn’t happen to a better guy and company,” said Bob Kipps, Managing Partner, KippsDeSanto.