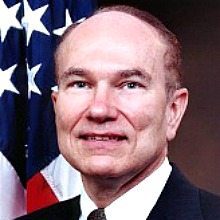 Van Hitch is a Senior Advisor at Deloitte Consulting, LLC. In his current role, Hitch helps Deloitte’s Federal clients and Federal CIOs identify long-term technology and transformation opportunities, to help them see the art of the possible in using technology to fundamentally change the way they do business.

Prior to joining Deloitte, Hitch held the honor of being the longest serving Federal CIO in his role as Deputy Assistant Attorney General and Chief Information Officer of the Department of Justice (DOJ). At DOJ, Hitch managed the Department’s $2.8 billion IT programs, providing oversight and strategic guidance to the components within the Department, as well as major internal investments that served over 115,000 employees in approximately 2,000 locations in 500 cities across the US.

WashingtonExec recently interviewed Hitch about his transition from the public to private industry, his advice to others seeking to follow the same path, his approach to identifying sustainable, long-term technologies for clients, and shared his deep interest in innovation.

WashingtonExec:  Could you tell us a little bit about your background and what you are currently doing at Deloitte Consulting LLP?

Van Hitch:  I spent over 9 years at the U.S. Department of Justice (DOJ) as the CIO and Deputy Assistant Attorney General for IT, retiring in July of 2011. I then joined Deloitte a few months later. I’m now Senior Advisor at Deloitte and work across our federal government practice both directly with clients and with the various Deloitte project teams with a special focus on making sure what we are doing is responsive to issues important to CIOs.

WashingtonExec:  How did the transition from the public to private sector go? Has working on the other side been what you expected?

Van Hitch:  Prior to my time at the Department of Justice I was a Partner with Accenture so I am familiar with the kind of business models and the scope of what they do. However, my role at Accenture seems like eons ago, because I was on the other side of the fence for so long. Coming back was interesting and certainly required some adjustment but I think my prior experience in the private sector helped and I have been able adapt pretty efficiently.

WashingtonExec:  What sort of advice do you have for an executive looking to leave government and go into the private sector?

Van Hitch: First of all, I would tell them not to rush into anything, focus on what they really like to do, make sure they can see themselves doing a particular type of work and evaluate if they think they could be good at it. Networking is very important. They should also make sure to talk to others who have made the transition like me. We are always willing to share information.

“You have to dive in and be assertive. You can’t wait around for the answers to come to you – it just doesn’t work that way. After you are in a company, make sure you look for people who could be mentors or people whom you would view as role model.”

WashingtonExec:  What do you think is the biggest misconception or mistake that people make when they leave the government and enter the private sector?

Van Hitch:  The contrasts between cultures in the private and public sectors are very different and not hard to miss. When you enter industry, you need to learn what the core of the company’s business is, the company’s business model and what makes the company effective. In the private sector there is a profit motive that isn’t in the government. How do they make money? How do you fit in? Even in the government I focused on our core mission and I made sure that I understood all of the various components; the 40 components that comprise the Department of Justice – what each one of them did and how they fit into the overall Justice mission. You have to remember to study that in a private sector organization – learn what they really do, network a lot, find out everything you can.

Second, you cannot sit back and expect people to bring ideas and insights to you. You have to dive in and be assertive. You can’t wait around for the answers to come to you – it just doesn’t work that way. After you are in a company, make sure you look for people who could be mentors or people whom you would view as role model. Continue to find others who have left the government for the private sector and have been successful. It is important and will take some time. I think it is realistic to expect that it is going to take a year or more before you really understand most aspects of the business.  I think it’s important to focus on that in the beginning of the process; otherwise you may never do it.

“The demand is going to be tremendous for cloud and mobile solutions, because in today’s severely constrained budget environment, that is where improvements and reductions in cost can be made. I think there is going to be a lot of pressure for implementation to happen more quickly than our IT workforce is currently comfortable with.”

WashingtonExec:  As a former Federal CIO, what do you think current Federal CIOs should focus on in the near and distant future?

Van Hitch:  These are challenging times for CIOs, but challenge brings opportunity. It is easy to get wrapped up in your own business as a CIO.  But multitasking is very important so being organized as a good business manager, people manager, and money manager will help you run your organization like a business.

It really takes a customer relationship management focus in order to do well. In parallel with that, there is the whole challenge of re-skilling your workforce both in new technologies and in different skill-sets. For instance, there are fewer coders than there are contract managers, financial managers and data analysts, so encourage your team to learn new disciplines and expand their knowledge base.

WashingtonExec:  How do you identify where the new opportunities are in the marketplace?

Van Hitch: I think contractors have to understand where the CIOs are. I’ll take the CIO perspective first. There are a handful of technologies that are on the horizon and have the opportunity to transform the federal government. There are cloud offerings (including shared services), customer relationship management, and business intelligence. Mobile is now something that is integral to the organization. Five years ago mobile was just thought of as something that was nice to have. Mobile technology is extremely valuable and I think it is gradually becoming more common in the federal government. This means that the processes are going to change dramatically. Instead of the computer being something that you interact with after you’ve done the job, you interact with it while you are doing the job as you go. Once again, I’m not just talking about the IT workforce but the entire workforce of the government.

In the general field of biometrics, there are a whole lot of advances that are taking place. When I use the word “biometrics”, I mean improvements in the recognition and analysis of human attributes such as voice; fingerprints, DNA, and thumbprints. Many kinds of biometrics are going to make their way into our applications at various agencies; CIOs need to be on the lookout for that. Obviously from a contractor’s standpoint, one of the hallmarks of a good professional services relationship –is that they listen to their clients, and understand their business.  Good contractors have the ability to look down the road and think through  the problems that their client is facing in both the immediate and distant future and developing recommendations to help them.

WashingtonExec: What do you regard as the truly disruptive IT offering in the federal government?

Van Hitch: I think many of these things that I’ve mentioned have some level of disruption, but for some of them the disruption will take place more gradually as these technologies are assimilated into the federal government. Certainly mobile technology is disruptive because it’s changing the way everybody does work.

Cloud computing can be disruptive from the IT personnel standpoint. If you are talking about the federal IT worker, I think cloud and shared services are disruptive technologies.  The reason I say that is because many of our federal IT people are used to working in a specific environment – a data center – and they’ve gradually had to increase their skills to learn new things. But it hasn’t been to the extent that is needed in order to take advantage of the cloud offerings and shared service offerings that are now available. The demand is going to be tremendous for cloud and mobile solutions, because in today’s severely constrained budget environment, that is where improvements and reductions in cost can be made. I think there is going to be a lot of pressure for implementation to happen more quickly than our IT workforce is currently comfortable with.

WashingtonExec:  What books do recommend to those looking to better their careers?

Van Hitch: I’m very interested currently in innovation because innovation is something very difficult to achieve in government. As a prior government employee with significant responsibility and also as a government contractor, innovation for the federal government is going to be critical because we can’t afford to do things the way we’ve done them in the past. At the same time, innovation is very difficult in the federal government because it does not reward risk taking. One book I just started is called The Solution Revolution, written by two colleagues of mine, Bill Eggers and Paul MacMillan. I think the ability to innovate will be a critical success factor for the government in the future. There are two books by Ray Kurzweil on innovation; The Singularity is Near and How to Create a Mind. Both books focus on how you create innovation.

On a personal note, I’m currently into nostalgia and reading a book on the history of the Wide World of Sports. Wide World of Sports was a TV show that aired every Saturday and was revolutionary because it brought all kinds of different sports, not just the major ones, to the public. I’m reading another book called Mary, Rhoda, Lou and Ted, about the Mary Tyler Moore Show. The book gives a backstage view of how the producers cast the show as well as the rise of women in the workforce.