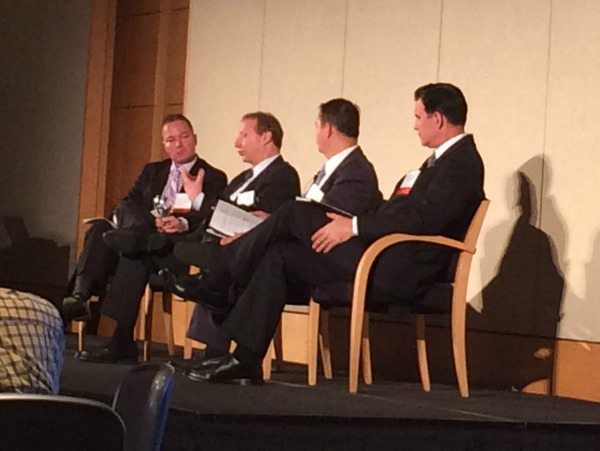 The Advanced Mobility Academic Research Center (AMARC) kicked off its final Federal Cloud Summit of 2013 on December 17th at the Ronald Regan Building.

Keith Trippie, Executive Director for Enterprise System Development in the Office of the Chief Information Officer, U.S. Department of Homeland Security (DHS) and Greg Mundell, Senior Vice President, Business Development at InfoZen, served as Co-Chairs of the government technology symposium and welcomed visionary keynote speaker Bill Schlough, Senior Vice President and Chief Information Officer of the 2012 World Champion San Francisco Giants. While proudly wearing his 2012 Championship ring, Schlough proved to be a dynamic and thought-provoking speaker about how he and his team are able to utilize technology to drive success on the baseball field. From dynamic ticket pricing, to sifting through “a billion data points a year on the field,” Schlough divulged as to why the Giants are “big fans of big data”. When an attendee asked if the Giants were using air-view technology in order to record player performance, Schlough confirmed that the team is “experimenting with drones”.

Klimavicz emphasized NOAA’s need for cloud and remote solutions, due to the nature of the Agency’s mission, and how he hopes to see more Federal CIOs unattached to merely one IT solution. Federal IT leaders need to create a more versatile and agile report system when implementing new technologies, in order to reduce the risk of duplication, added Klimavicz. He also said that he has no issue regarding who secures NOAA’s data storage capabilities: whether it is industry or government. As long as the information is secure, he is comfortable “letting go” of the data.

Schwartz told the audience that “decreasing the development cycle is kind of [his]obsession these days,” and that he hopes to see more experimentation at the coding and beginning stages of projects, so that issues are caught quickly, before a program becomes robust, making it harder to implement major overhauls. Experimentation and failing fast are qualities not emphasized in the federal IT sector, but Schwartz hopes that with the rapidly changing IT innovation, the federal sector will slowly function more like private industry.

Chin works closely in implementing mobile car wash capabilities for DHS. Through the program, he hopes to reduce government technology acquisition cycles and is looking for integrators who specialize in migrating data.