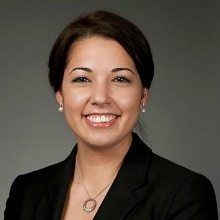 In 2008, at age 26, Karen Trowbridge started Trowbridge & Trowbridge (T&T) with five employees. In only a few short years, T&T has grown to a $27 million company with over 300 employees supporting technology missions for Defense and Federal Civilian clients.

The company has been ranked as one of the Inc. magazine 500/5000 fastest-growing privately-held businesses in the country for three consecutive years since 2011.

WashingtonExec had the pleasure of interviewing the visionary entrepreneur about the lessons she learned from growing T&T, the Women of Small Business (WOSB) community, the wisdom she received from her parents, and her vision for T&T in the coming years.

WashingtonExec: What have you learned since you started T&T that you wish you had known earlier?

Karen Trowbridge: If I’d possessed a crystal ball when we started out, it would have been nice to know the climate of the market we would be facing. For those of us in government contracting, there have certainly been challenges over the last five years, with procurement delays and budgetary constraints. Had I known the full impact on our future, I think I would have probably invested a little more heavily in business development at the start. For the first couple of years, we spent a lot of time and energy building a very strong infrastructure. Part of that was to ensure that, as an emerging small business, we were well prepared to tackle and succeed at more advanced work, which has definitely paid off. We also purchased a sizeable small business early on, so there was a lot of infrastructure development and integration that went into combining the two companies and making sure we were a cohesive organization. I don’t regret spending the time building our infrastructure; as a result, our organizational maturity was well advanced past that of a typical start-up. But, if we had focused more aggressively on marketing T&T, it would have perhaps smoothed our course a few years later. Regardless, in the last five years I think we’ve grown and established ourselves as a trusted partner in the industry and with our customers.

“One of the positive things about starting business five years ago is that we started in a time when you HAD to do more with less. T&T has never really been in the situation of being too cozy and comfortable.”

WashingtonExec: Taking that crystal ball and switching it the opposite way; where do you see T&T five years from now?

Karen Trowbridge: That’s a great question, and my team and I discuss that quite a bit to maintain a strong strategic plan. Our goal is to continue growing, evolving with the market, and staying agile to respond to new requirements. We will likely grow out of the small business size standard within another year or two at the most, and we’re preparing for that in earnest. T&T will continue to be an end-to-end service provider and systems integrator, but we’re already honing our capabilities in specialized niche focus areas. It’s hard to make a revenue prediction for the next five years, but we’ll certainly be larger than we are now, hopefully by ten-fold. Is that unrealistic? Maybe … but I think we can do it!

WashingtonExec: In an interview you did with us a few years ago, you mentioned that you thought the new women owned small business 8(m) program that took effect that year would open doors for many women owned companies; but there were still elements of the program you thought could be strengthened. What were you referring to? What do you think still needs to be changed or strengthened about that program?

Karen Trowbridge: When the ruling went into effect in 2011, there was a cap on the value of the contracts that could be awarded under the program. It was $5 million on manufacturing contracts and $3.5 million for service contracts … such as IT. That element really needed further consideration because, while $3.5 million is a significant contract for many small companies, for larger small businesses, it actually limited our ability to use the WOSB/EDWOSB program. For example, we had a couple of customers who were excited that we were a woman-owned small business. They wanted to work with us but ultimately couldn’t use that program to access T&T’s services because the contracts they were envisioning were well over $3.5 million. The good news is that just this year the Small Business Administration removed that limitation, so now contracting officers can use the set-aside program without the cap. That’s definitely huge for the WOSB contracting community.

” Our goal is to continue growing, evolving with the market, and staying agile to respond to new requirements. We will likely grow out of the small business size standard within another year or two at the most, and we’re preparing for that in earnest.”

WashingtonExec: How would you say T&T does more with less? Would you say that your company’s leadership style is more top down or bottom up?

Karen Trowbridge: One of the positive things about starting business five years ago is that we started in a time when you HAD to do more with less. T&T has never really been in the situation of being too cozy and comfortable. I think one of the keys to operating a lean infrastructure is being able to balance agility and effectiveness with efficiency. Whether it’s as a company or supporting your customers, you must have strong processes in place, with a clear agreement to use them, and then maintain flexibility to accommodate emerging priorities and requirements as needed. That’s been T&T’s approach to “doing more with less”. In terms of our leadership style, it is a combination of both approaches. We have a clear vision of our mission, with consensus among our core management team, but we certainly pride ourselves in listening to our employees across the company. It’s probably 50/50. I think the combination of leading from the top down and listening from the bottom up is a great expression of our company culture.

WashingtonExec: If you could change one thing about the acquisition process of the federal government what would it be?

Karen Trowbridge: (Laughs.) That is a loaded question. I would wholeheartedly support some kind of recognition of the “middle tier” markets—companies who have outgrown a small business designation, but who are not behemoth multi-billion dollar contractors. This would give federal customers easier access to companies that successfully attain the stability and ability to handle very complex requirements, but who are of a size that still allows for a personal touch and a progressive, cost-effective approach to service delivery.

“I think the combination of leading from the top down and listening from the bottom up is a great expression of our company culture.”

Karen Trowbridge: I was entrepreneurial from a young age. I used to make and sell crafts and jewelry, and I would babysit quite a bit. Technically, my first job in high school was at a flower shop. I worked for a florist for three or four years and I loved the creativity and customer interaction involved. Thinking back, I guess these were experiences I looked for even in the jobs I held through college. I really enjoyed working with people and being analytical, which helped me move into various leadership positions and participate in an executive training program shortly after graduation.

WashingtonExec: How has your father influenced you growing Trowbridge & Trowbridge?

Karen Trowbridge: Foremost, I’d say his leadership style and general business perspective has had a big impact. He has been in the industry for a long time so he’s seen the cycles of this industry. That’s definitely given me a broader and very helpful viewpoint, especially with starting a company at 26 years old. My mother has been influential as well. She isn’t part of this industry, but she taught all of her children to be positive and optimistic. That outlook on life will get you through anything.