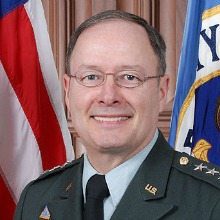 According to the June issue of SIGNAL Magazine, Gen. Keith B. Alexander, director of the National Security Agency (NSA) and commander of the U.S. Cyber Command, plans to reorganize the Department of Defense (DoD) cyber community. In an exclusive interview with the magazine, Gen. Alexander said he wants to combine forces from the military communications and intelligence communities to combat a broad cyber threat that he describes as “only going to get worse.”

“Cyberspace is becoming an active area in which nations will attack us,” he said. “We are going to have to defend the nation in this area—that is our role.”

This reorganization calls for consolidating the signal community, signals intelligence and the cyber community. “They all operate in the same space, so they should be trained together to defend the nation’s cyberspace.”

Gen. Alexander calls for combining these three traditionally separate fields so the command can maximize the complementary skills that each discipline brings to the cyber realm.

This approach acknowledges the convergence of network systems over the past few years. As networking, communications and data storage became digitized, previously disparate disciplines assumed greater commonality. Because they now have more common aspects, these disciplines share similar vulnerabilities as well as potential solutions. “The structure of the cyberforce has not kept pace with these technology developments,” said the general.

He added, “The biggest challenge facing this convergence approach will be changing the existing military culture. Nobody is looking at the new mission and saying, ‘That’s the one the nation needs right now because nobody is doing it.’ That’s what we need to do.”

Gen. Alexander will expound on his plans in his keynote address at the AFCEA International Cyber Symposium, Baltimore, June 25-27.