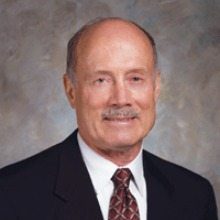 “It is a great honor to be recognized for my service to our country and to George Mason University, and I am truly humbled by the kindness of my colleagues,” said Volgenau, of the award honor.

Volgenau founded SRA International Inc. in the basement of his Reston, Va., home in 1978.  The firm is a technology consulting and system integration company serving primarily the federal government and has sustained rapid growth and now has about 6,000 employees. SRA was the sixth most successful initial public offering on the New York Stock Exchange in 2002 and for ten years in a row, SRA was named by Fortune magazine to the list of  “100 Best Places to Work in America.”

Volgenau has an extensive record of public service. From 1976-78, he was director of inspection and enforcement for the U.S. Nuclear Regulatory Commission, where he managed an office of nearly 700 engineers and physicists that inspected all of the commercial nuclear power plants under construction and in operation in the U.S. He was commissioned as a U.S. Air Force lieutenant in 1955, and later served as an analyst and team leader in the Office of the Secretary of Defense conducting large-scale weapon system and command structure analyses. He also helped develop space boosters, satellites and computer systems. He taught astronautics and graduated from the Air Force astronaut course. He retired as a colonel after 20 years of service.

For three years, Volgenau was a member of the George Mason University Foundation Board of Trustees. In 2004, he was appointed to the George Mason University Board of Visitors and served as rector from 2007 to 2012. Contributions given to the School of Information Technology and Engineering, now the Volgenau School of Engineering, by Volgenau and his wife, Sara, are enabling the school to make strategic investments in critical areas of study such as biotechnology, knowledge management and information security.

Volgenau received his PhD in engineering in 1966 from the University of California at Los Angeles. He holds a master’s degree in electrical engineering and is a graduate of the U.S. Naval Academy. He is a professional engineer and a member of Tau Beta Pi.