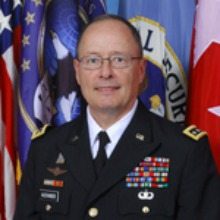 NTVC will hold its final Titans breakfast of the 2012-2013 series on May 10th, where General Keith Alexander, Commander of the U.S. Cyber Command, Director of the National Security Agency (NSA) and Chief of the Central Security Service, will be the keynote speaker.Gen. Alexander will speak about current cyber threats facing the country, and what the IT and national security administration can do to address these threats. He will also examine the future of intergovernmental and public-private information sharing and partnerships.Gen. Alexander, Commander of USCYBERCOM, is responsible for planning, coordinating and conducting operations and defense of Department of Defense (DoD) computer networks. As the Director of NSA and Chief of CSS, he leads the DoD’s national foreign intelligence, combat support and U.S. national security information system protection responsibilities, including the interconnected missions of signals intelligence and information assurance.For more information about registration and sponsorships for this event, click here.