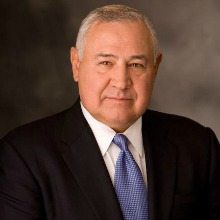 General Wald spoke with WashingtonExec about his role at Deloitte, future challenges in terms of sequestration and defense spending, the “New Normal” strategy, emerging trends, and more.

WashingtonExec:  Could tell us a little bit more about your background and your current role at Deloitte?

General Wald: I grew up in Minot, ND and went to school there. I served in the United States Air Force for 35 years, mostly flying airplanes.  At my last job as the Deputy Commander at European Command in Stuttgart, Germany I was working for the NATO Commander, General Jim Jones which was in 2006.  After I left the Air Force, I opened my own consulting firm, and transitioned in 2007 to L-3 Communications as their Vice President for International Programs. I joined Deloitte in 2009 as part of the Aerospace and Defense practice and a little over a year ago I became the Department of Defense (DOD) sector leader.

WashingtonExec:  What do you first see as challenges in the next year or two where defense spending and sequestration are concerned?

General Wald: It’s probably the most talked about issue in the world, and in the United States today.  There are definitely going to be budgetary changes in the Defense Department and the question is how they will manifest themselves. Things are occurring right now that are causing inefficiencies in the government, particularly in the Department of Defense because of the looming threat of cuts.

“Everybody will need to make some kind of a sacrifice. I think that right now the uncertainty is as bad as we are going to see from the standpoint of budgetary issues because the path forward is unpredictable at the moment.”

WashingtonExec:  Can you tell us more about the “New Normal” philosophy, and strategies for the U.S. military?

General Wald: The ‘New Normal’ is what I call the situation we have experienced since the end of the Cold War.  For those who remember what the world was like in 1990, we were concerned at that time about the Soviet threat and if we were going to have a nuclear holocaust. When that ended, it was a pretty seminal event for the country.  I describe it as a collective sigh of relief and we, as a nation, and our allies went into a peace dividend mode.

It took a long time to realize the threats that we face today. We are being threatened by people that have no affiliation with a nation. That’s the new world we live in.   We have deterrents for China, Russia, North Korea, etc. through both nuclear weapons and missile defense capabilities and we are going to abide by the appropriate laws.  Non-nations state actors are, in my mind, the biggest challenge that we face today.

The “New Normal” means that this is the environment that we now live in so I think our military needs to be properly structured for that and I don’t think we are. Conflict evolves and there needs to be a process; a separate group of people that can be powerful enough and objective enough to restructure our military.  U.S. intelligence surveillance reconnaissance capability is second to none in the world and that includes space. And we should be careful because much of what we do in the military is dependent upon space access to work effectively: global positioning, timing, navigation, intelligence, the whole thing.

WashingtonExec:  How important is U.S. energy security to our national defense?

“If I could be king for a day I’d do two things: First, I’d engage an independent, sophisticated, objective board of experienced individuals to conduct a structural review of the United States military. Second, I would set up an energy agency with a comprehensive energy policy making authority.  This would, of course, assume the issue of sequestration has been solved.”

WashingtonExec:  As a seasoned individual in your field, what have been your observations in regards to trends that have started to emerge?

General Wald: From a threat standpoint I see the demise of the nation-state. There is a change in the fact that the nation-state may not always be the preeminent decision maker in the 21st century.  The second part is the technological trends that are occurring. For example, big data, data analysis, storage transfer utilization, and the fact that the electronic age is changing our lives dramatically.  We now have the ability to use the massive amount of data that’s being created every day to make better decisions.

WashingtonExec:  How would you say your military background prepared you for your role at Deloitte today?

General Wald: There are several ways – and any four-star would probably say this – which revolve around the evolving geo-strategy or the global geo-strategy that we live in.  I’ve spent a lot of time traveling in an official U.S. Government capacity with the military and that has helped prepare me for my current role as the leader of Deloitte’s Department of Defense practice.  The second is that I had quite a few joint assignments particularly toward the end of my career where I spent a lot of time learning about capacities of other branches of the military. I took a lot of pride in building my network when I was on active duty and interfacing with people that I thought were both helpful to us in the work we were doing but also compelling in their intellectual capacity.