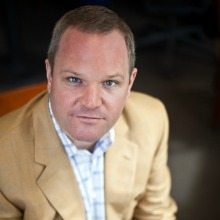 A lot of people wonder what one can do with a B.A. in English. Remain in the creative route and teach? Get a Ph.D? Become a writer? Well, that’s not the case if you’re Matt Voorhees.

Voorhees, who holds a B.A. in English from Kenyon College,  is not only CEO and co-founder of Anybill, an accounts payable outsourcer, but he is also this year’s 2013 DC Heart Ball Chair. The Ball, on February 23rd this year, brings together and celebrates the work and mission of the American Heart Association (AHA).

Voorhees spoke with WashingtonExec about his company, why AHA and the Heart Ball, what made him want to take on more of a leadership role within AHA, the ball’s 15th anniversary, changes over the years, the new Ball venue (the National Building Museum), and more.

WashingtonExec:  Can you tell us a little bit more about your background and what led you to start your company, Anybill?

Matt Voorhees: I’m one of those hybrid folks that followed a path of liberal arts and English and letters and words and then of course ended up running a finance technology company.  I moved to the DC area in 1997 and launched, with a buddy of mine from college, what would become Anybill.  Today we are one of the world’s leading accounts payable outsourcers and the largest payer of corporate tax payments in the world.

WashingtonExec:  What made you want to become involved with American Heart Association’s (AHA) DC Heart Ball?  There are a lot of different large non-profits to choose from in this area.

“It’s important that we give back in this city that advocates so much but doesn’t always do so locally.  It’s especially important in DC because so much of the dollars that we raise actually come back to the metro area; whether it is through studies in NIH or community outreach programs.”

WashingtonExec:  What made you want to take more of a leadership role in AHA?

Matt Voorhees:  It’s important that we give back in this city that advocates so much but doesn’t always do so locally.  It’s especially important in DC because so much of the dollars that we raise actually come back to the metro area; whether it is through studies in NIH or community outreach programs.  While Heart is a huge organization and is based in Texas of course the local market here and the dollars that are raised here have an impact here.  It is important that the corporate community remembers that and supports it.

WashingtonExec:  Have you found or have you seen a slight change in fundraising goals due to high uncertainty in the market place?

Matt Voorhees:  I’m sort of pigheaded in our goals and I’m very confident that we will reach them.  We have a goal of $1.5 million this year.  I’m a numbers guy and it’s the fifteenth anniversary so I thought a nice round goal would be $1.5 million.  I think we will make it.  We’ve had some huge help from corporate partners including Wells Fargo and The Legacy Foundation – one of the largest foundations headquartered here in DC.

I’d have to say I sense an optimism out there and I’m certainly optimistic about our own business and I think with the election behind us and with some of the fiscal cliff resolution, people are lifting their heads out of the hibernation and feeling positive.

We do it not for glory and not for tax deductions but because it is important and the mission that the American Heart Association undertakes on behalf of everyone is important.  When you look at Heart, you think where would we be without CPR, for instance, and without angioplasty and stents. They have been involved in a lot of groundbreaking research.  The breadth of what they do is amazing.

WashingtonExec:  You’ve attended many Heart balls throughout the years.  What is your favorite part of the evening?

Matt Voorhees: My favorite part is meeting people whom I know outside of Heart and hearing their connections to the cause.  I think it is important to remember we all have a heart, we all need it, and we all need to make sure we know as much about it as possible. I think that is something that unites us as individuals and is also the reason why we have our corporate partners involved.  It’s interesting to come together and see someone across the room that you know that you had no idea that their mother, their father, their son, their daughter was affected by heart disease or an event in some way or another.

WashingtonExec:  Did you have any impact in choosing the new venue this year?  Are you excited about it?

“I view DC as the heart of the metro area and when I was asked to chair the ball I said, ‘You know this is going to be the fifteenth anniversary.  I think we need to strike a new image and make a new impression for the ball and we should do it in DC.’  Everyone agreed.”

I didn’t have to arm twist too much and we are going to have a great evening at the National Building Museum.

WashingtonExec:  Since this is the fifteenth anniversary is there anything different this year for the actual program that we should look forward to?

Matt Voorhees: There is a lot that’s different.  Robby Benson is going to host us for the evening.  We will have an amazing performance/dance piece produced by Christopher Janney… I can’t even describe how wonderful Janney’s work is as it relates to sound and the heartbeat with a visual representation and an amazing soulful performance backing this this exciting performance piece.  We’re trying to really involve the audience and make a passionate plea for mission.  The Building Museum is an amazing, amazing venue and we are looking forward to getting as many folks into that incredible space as possible.