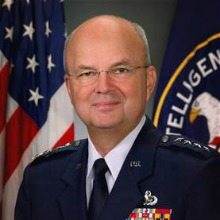 General Hayden, who was the first Principal Deputy Director of National Intelligence, will be recognized for his unwavering service to the United States and his dedication, commitment and admirable support of our nation’s intelligence agencies and military.

“INSA is proud to host the 29th Annual William Oliver Baker Dinner to honor General Hayden for his outstanding career in the defense and intelligence fields,” said INSA Chairman Ambassador John Negroponte. “I have the highest regard for General Hayden. His outstanding background in leadership roles in the government and military make him a most-deserving recipient of this prestigious award and a role model for national security professionals.”

General Hayden served a 39-year career with the U.S. Air Force earning the rank of four-star general before retiring in 2008. Prior to his retirement, he served as Director of the National Security Agency. More importantly, he became the nation’s first Principal Deputy Director of National Intelligence, a position that garnered him the title of “the highest-ranking military intelligence officer in the armed forces.” In 2006, he was appointed Director for the CIA and remained in the position until 2009.

General Hayden also held positions as Commander of the Air Intelligence Agency and Director of the Joint Command and Control Warfare Center early in his career. Currently, he serves as a Principal at The Chertoff Group and is a distinguished visiting Professor at George Mason University in Fairfax, VA.

General Jim Clapper, Director of National Intelligence and former 2006 INSA Baker Award recipient, reflected on the long relationship between him and General Hayden and what the award represents.

“This award represents the ‘crown jewel’ of recognition–so richly deserved–of Mike’s long and distinguished career in the Intelligence Community and in public service,” he said.

He added, “I have known and worked with Mike Hayden for many years, most recently during his tenures as Director of NSA, the first PD DNI, and as Director of CIA. I am very pleased that he has been selected as the 2013 Baker Awardee presented by INSA. This award represents the “crown jewel” of recognition–so richly deserved–of Mike’s long and distinguished career in the Intelligence Community and in public service.”

INSA’s William Oliver Baker Award was established to award individuals who have demonstrated excellence within their field, as well as promote excellence in intelligence and national security activities of the U.S. government and associated endeavors throughout the private sector. Members of the government, industry and academic community are all eligible to receive the award.

Many high ranking members of the intelligence and national security communities will be in attendance to honor General Hayden at the award ceremony and dinner which will be held on Friday June 7, 2013, at the Omni Shoreham Hotel in Washington, DC.