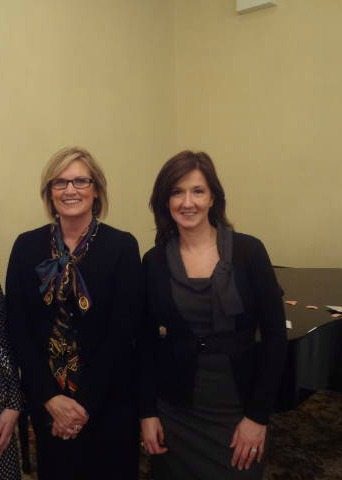 Last week, WashingtonExec held its semi-annual Executive Assistant (EA) appreciation event, to say thank you to the “gatekeepers” for the top executives of consequence in government contracting. The event, held at Waterford Receptions in Fairfax, Virginia, brought over 45 EA’s to the first-ever speed networking event. Participants were able to meet like-minded individuals in their profession quickly and with a purpose.

“Having the “Speed Dating” themed event with all three EA groups was a perfect opportunity for information sharing and networking.  The Waterford provided the perfect setting and having Alan Berson there to provide his wisdom on leadership was an added bonus.  The evening was enjoyed by all,” said Barbie Sandy, EA to Randy Fuerst, COO of Oceus Networks.

Alan Berson, author of Leadership Conversations and executive coach, also addressed the group about the importance of building professional relationships as a way to increase your professional connections and value to the executives that they support.

“One of the things I was struck by while listening to the EA’s talking during the meeting was how they truly saw themselves as a trusted advisor to their bosses and have important conversations with them.  They ask the hard leadership-type questions and serve as a reality check for their bosses in addition to their regularly assigned managerial tasks.  In every case this is because of the strong working relationships of trust and respect that they’ve formed.  I am not even sure the bosses know how much the EA’s are doing for them!,” Alan Berson told WashingtonExec.

True to their expertise, the EAs assisted in supporting a great event with popular raffle items. Special thanks to Erin Brady, EA to Sunny Bajaj, founder and CEO of Digital Management, Inc. (DMI), who donated four court-side seats for an upcoming Wizards basketball game at the Verizon Center. Other raffle items included a complementary dinner at 2941 and coupons from Panera Bread.

As we reported in December 2012, Chairperson of Group I, Jana DiCarlo, EA to Serco Chairman and CEO, Ed Casey, has stepped down as founding chairperson and will be succeeded by Lisa Robinson, EA to President and CEO of Six3 Systems, Inc., Bob Coleman. Group 2 nominated Maria Cornell, EA to President of CGI Federal, Donna Ryan, to replace Reggie Hill, EA to SRA International CEO Bill Ballhaus, from his one-year term. Group 3 Chairperson Martise Gaymon, EA to George Schindler, President of CGI U.S. at CGI Group, Inc, has handed the reins to Barbie Sandy, EA to Randy Fuerst, COO of Oceus Networks.

Waterford Receptions sponsored the well-attended event, noting the value and unique this of this dynamic and growing group of professionals.

“It was a great opportunity to showcase our beautiful facility, food and service to the professionals who make “it” happen in the Northern Virginia, DC and Maryland region,” said Keith Clark, President and CEO of Waterford Receptions.

The WashingtonExec Executive Assistant Committee now has over 100 members and counting.