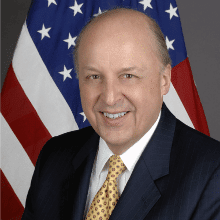 The former Director of National Intelligence, Ambassador John Negroponte, has been selected by the Intelligence and National Security Alliance (INSA) to be the new chairman of its Board of Directors. Ambassador Negroponte will be taking over from chairwoman Fran Townsend, former Homeland Security Advisor to President George W. Bush.

“I am pleased and proud to have been selected as chairman of the INSA Board of Directors, succeeding Fran Townsend,” said Ambassador John Negroponte. “I look forward to working closely with the INSA Board, INSA Members and with Acting President Chuck Alsup as INSA works to keep salient intelligence and national security issues before the public and our government.”

In his new role, Ambassador Negroponte will guide and manage INSA’s Board of Directors and work with them and staff to further develop and implement INSA’s strategic vision, policies, and programs. His first task will be to oversee the hiring of a new INSA President.

“I know I speak for our entire staff in saying that I am thrilled that Ambassador Negroponte will be leading the INSA team,” said INSA acting President and Vice President for Policy, Chuck Alsup. “He is the ideal person to lead INSA to the next level of relevant service and support to the intelligence and national security communities. With him at the helm, I am confident INSA’s great work—the non-partisan collaboration, networking and examination of policy issues and solutions—will reach a much broader audience.”

Ambassador Negroponte has previously held posts as a diplomat in a variety of high-level national security positions. He was the U.S. ambassador to Honduras, Mexico, the Philippines, and most recently, Iraq, and also was the U.S. ambassador to the United Nations. He has served twice on the National Security Council staff and was most recently Deputy Secretary of State. Currently, Ambassador Negroponte is vice chairman of McLarty Associates and a senior research fellow and lecturer at the Jackson Institute for Global Affairs at Yale University.

“I could not be more pleased to be passing the baton of leadership to Ambassador Negroponte,” said INSA’s outgoing chairwoman of the Board, Fran Townsend. “He will bring an intimate understanding of the issues facing the Intelligence Community and the ability to bring the key players together to design creative solutions to these challenges. With this choice, INSA secures its unique position as the organization providing high level thought leadership to the Intelligence Community.”