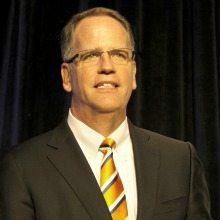 Jeremy Wensinger is Chief Operating Officer over at GTSI, a leading hub of information technology in delivering solutions and services headquartered in Herndon, Virginia with approximately 450 employees.

WashingtonExec chatted with Wensinger as he spoke about his time at GTSI, trends in the IT industry, data collection, competitiveness with government cuts, and much more. Read further to see what Wensinger had to say.

WashingtonExec: Can you describe your background and a little bit about what you do at GTSI?

Jeremy Wensinger: My title at GTSI is Chief Operating Officer. Prior to this I was the president and chairman of Cobham Defense Systems. Cobham is a UK based defense contractor that has operations in the US and around the globe. I ran their C4ISR business.

WashingtonExec: You are coming up on your first anniversary at GTSI. What do you think you have learned from the experience so far?

Jeremy Wensinger: Any time you come into a new company you learn many new things but one of the bigger ones for me is the application of commercial off-the-shelf solutions for many of the government mission needs. I came from an intense R&D environment. Obviously those have a place, but this has been a great opportunity to take ready-made, off-the-shelf IT and IT-related solutions, and solve mission problems for the government at a dramatically reduced price. That has been one of the attractions of coming to a business like this.

WashingtonExec: What are some emerging trends in the federal IT industry?

Jeremy Wensinger: The primary challenge 10 years ago was bandwidth, trying to push data out to the user. Now, rather than pushing the data it is much more of a pull environment. What you want to do is put the data in a format that allows the user to structure the information in a way that enables them to make the best available decision.

We need to be continuously pushing the envelope to make sure we have ubiquitous access to information so people can make better decisions; grabbing hold of the challenges around big data and really starting to get focused on picking up the tempo associated with it.

There are new models that are emerging, such as open source or commercial for database management systems. If you look at in memory processing, or Hadoop distributed file systems or other items like that – by far these technologies get the most attention in the market. The primary use for Hadoop is processing massive amounts of data in a scalable manner. This idea around scalable you’ll hear over and over again.

The other one is noSQL databases. These are frequently used to store big data. They are well suited for dynamic data structures and they are highly scalable. The data stored in the noSQL database is typically high variety. The systems are intended to simply capture the data without categorizing or parceling it. These trends that we see are around trying to allow users ubiquitous access.

Jeremy Wensinger: I watch our youngest sitting on the couch, and he will have his laptop open, he’ll have his iPhone, he’ll have an Xbox game loading, he’ll be DVRing a show because the kid never watches commercials and he’ll have his history notes on his lap. It’s just the general ability of that generation, or maybe the whole user experience that is evolving, to sift through information and determine what is useable.

I think what the user is telling us with regards to big data is stop trying to tell them what’s useful, they will figure it out. What they want is ubiquitous access. They will figure out how to make better decisions because the mission is going to define what their needs are. Trying to decide what their needs are is a losing proposition. What you and I may deem clutter they may deem useful intelligence for decision-making.

WashingtonExec: How can a business stay competitive in an era of government spending cuts?

Jeremy Wensinger: We’re continuously looking at ways to be more cost competitive and doing more with less, and automating where we can. It still doesn’t change the challenge that our solutions need to be relevant to the mission so we spend time trying to understand where the customer’s mission is headed, how we can help them accomplish that task more effectively and be in a position to serve them. I’m on a shared services council that has been very interesting because many of the CIOs across the whole government see the same need. They are working very diligently at trying to leverage each other’s successes so that they can do more with less.

I think government and industry are doing a much better job than they did 10 years ago at collaboration and managing data in a way that is relevant to the end user.

WashingtonExec: Do you think there is a gap between the amount of data that we collect and the amount of people who are able to analyze it?

Jeremy Wensinger: It is a constant challenge to compete for talent. As an industry there have been some efforts to reinforce the need for STEM focus at the elementary school level to prepare that next generation and get them interested in STEM related programs. My interest in space came from the fact that I was exposed to the space program as a young child. That fascination stayed with me all through my career. We’d like to see the same thing happen to the next generation. Get them interested in STEM early, hopefully they’ll stick with it and we’ll have an infrastructure. I think we can produce a lot more talent than what’s available today.

WashingtonExec: Did you watch the Curiosity landing?

Jeremy Wensinger: I did. They had a tremendous outcome and it was a lot of fun to watch people have that kind of success. I wish them only continued success. It’s those types of programs that I’m talking about – in some small way hopefully – that will touch the heart and curiosity of a young child who will stay interested in STEM and eventually contribute to our industry.

WashingtonExec: What is something you like most about your job?

Jeremy Wensinger: There is no easy way to answer that because there are so many things every day that you bump into that are intellectually challenging. The best thing about this job is the people that we serve. There is tremendous gratification in supporting our war fighter and our civil agencies as they try to serve our nation. I’d find it hard pressed to find another job where you can go home feeling that satisfied.

WashingtonExec: Who is someone that you admire?

Jeremy Wensinger: Aside from my dad, the people of GTSI are people that I have, in such a short period of time, really come to admire. I have never seen anything quite like it. They are just a very dedicated group of people and it’s an honor to work with them.

WashingtonExec: Would you comment about GTSI’s future plans, since it was acquired in May of this year?

Jeremy Wensinger: I think the acquisition will obviously bring the opportunity for scale for GTSI in the areas where we had no presence, such as mainframe applications and mainframe computing. We see many areas of opportunity and we are excited to have a new owner who has the demonstrated ability to invest in key technologies for growth. We have just started the integration process and the initial inputs are very encouraging.