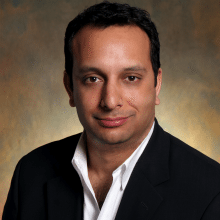 From January 2, 2013, Arvind Manocha will be the Wolf Trap Foundation for the Performing Arts‘ newest President and CEO, following the retirement of long-time leader Terrence D. Jones.

Manocha is currently the Chief Operating Officer of the Los Angeles Philharmonic Association, where he oversees the Hollywood Bowl, a venue that serves more than one million patrons annually and shares a commitment to the all encompassing programmatic vision of the Filene Center at Wolf Trap National Park for the Performing Arts. Since he took on management of the historic facility, the Hollywood Bowl has been named “Best Outdoor Amphitheatre in the U.S.” eight years in a row by Pollstar magazine (2004-2011).

“The Board was committed to finding a strong successor to build upon Terre’s outstanding achievements,” said John C. Lee, IV, Chief Executive Officer of Lee Technologies and Chairman of the Wolf Trap Foundation Board of Directors. “Following an extensive national search, we are thrilled to have selected Arvind from an impressive pool of candidates. Arvind’s demonstrated record as a dynamic leader and creative thinker makes him ideally suited to lead the Foundation to new levels of excellence while upholding the legacy of our founder, Catherine Filene Shouse.”

Over the course of his career with the Los Angeles Philharmonic, Manocha first joined the organization to direct the strategic planning for Frank Gehry’s Walt Disney Concert Hall. After taking over management of the Hollywood Bowl in 2004, his position with the Philharmonic grew to include responsibility for a wide variety of year-round artistic and operational activities at both of its iconic venues, the Hollywood Bowl, and Walt Disney Concert Hall.

Prior to joining the Los Angeles Philharmonic Association, Manocha served as a consultant in the Los Angeles offices of McKinsey and Co., working with clients across the entertainment, retail, and non-profit arts sectors. After leaving McKinsey, he consulted for a number of arts organizations around Southern California.

Manocha is a graduate of Cornell University and of the University of Cambridge, UK, where he was a Marshall Scholar.