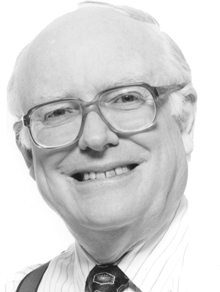 The government contracting and information technology community mourns the loss of Donald deLaski, a leading visionary in the software industry and generous philanthropist. deLaski passed away on March 9 at his home from lung disease after a long time battle with asthma.

His success in government software solutions started back in 1983, when he co-founded Deltek with his son, Kenneth, after spending twenty years building an accounting practice for government contractors. He funded the startup with $100,000 to build the new government software. Today, the public company has amassed annual revenues of $341 million, employed over 750 people, and has served over 15,000 organizations in 80 countries worldwide.

As a result, Deltek has become one of Washington D.C.’s largest and most successful software companies, garnering recognition as a five-time winner of the prestigious Achievement in Customer Excellence (ACE) award.

Current CEO of Deltek Kevin Parker commented, “when it comes to accounting for government contractors, Don deLaski was the guy that changed everything.  In the early 1960’s he figured out how to put very complicated cost accounting information together for his clients in an organized and logical way.  And then finally, when the technology was ready, he seized the opportunity to automate his approach and to make it affordable for firms of all sizes.”

Beyond successes in enterprise software and information solutions, deLaski was a big proponent of philanthropy, having donating over $40 million to local DC charities through the Donald and Nancy deLaski Foundation.

Through the foundation, he and his made significant donations to George Mason University to build the Performing Arts Building and also to found the GMU Center for Consciousness and Transformation. They also funded major gifts for medical care for local asthmatic children through Howard University and also arts education for children through the Sitar Center. The Mount Vernon Library, new Arena Stage building and the Center for Mind-Body Medicine all benefited from generous gifts from deLaski.

A memorial service for deLaski will be held this Friday, March 16, 2012 at 3:30pm at GMU’s deLaski Performing Arts Building on the Fairfax Campus.

deLaski was married for 54 years to Nancy Lee Panossian, who died in 2009.   He is survived by his three children, Kenneth, Kathleen and David, and six grandchildren.