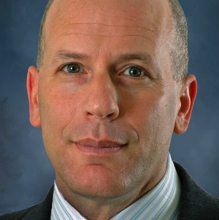 As the CEO and Managing Partner of Three Wire Systems, LLC, Dan Frank knows how to achieve success. Frank served as a former naval aviator for the United States of America and since then he has dedicated his life toward supporting veterans. WashingtonExec recently interviewed Dan Frank about his business success and personal legacy.

WashingtonExec: What has been the key to all your success in business?

Dan Frank: I have to agree with Woody Allen, who said, “Eighty percent of success is showing up.” Success doesn’t come to you; you need to go to it. So I’ve been as proactive as possible, putting myself out there in order to make things happen. There’s preparation and there’s luck, but luck and preparation have to meet opportunity in order achieve success. I’ve also found that you can’t be complacent. Just because Three Wire makes a successful pitch one week doesn’t mean we can sit back and rest on that achievement. Success is fleeting. Great things can happen but you need to keep making them happen.

WashingtonExec: Your company just missed the Inc. 500 ending up on the Inc. 5000 list at #516. How does it feel to see such tremendous growth in your company?

Dan Frank: I was certainly somewhat disappointed because based on this year’s numbers as compared to last year’s, I was expecting Three Wire to place in the top 500, but honestly you just dust yourself off and get ready for next year. I feel pride in our company and good about how we’re building something. Of course there’s no such thing as overnight success and I’ve certainly had my failures just like anyone else. What’s important is that Three Wire continues to grow and thrive, this year and the next and the next after that.

WashingtonExec: What advice can you give to start-up business owners to help them grow rapidly?

Dan Frank: You hear a lot about the importance of focus, about sticking to your business plan and your initial mission. But in my case diversifying turned out to be a key to success. Three Wire started as a pure IT company, so when I decided to go after the initial VetAdvisor contract and expand into telehealth and coaching services I was taking a risk. It was a risk that paid off; Three Wire’s integration of wellness and technology sets us apart and has come to be the core of our expansion. So the advice I’d give is that you have to be willing to go down another path to get you there. Focus is important but so is flexibility. Keep your eyes open and take a few risks; it will be worth it.

WashingtonExec: What would you like to be remembered for at the end of your career?

Dan Frank: I take Three Wire’s core values to heart, and integrity and moral compass are two of them. I’d like to be thought of as guy who was fair and who was respected. I strive to live my life with integrity both personally and in business and I can only hope that I succeed, so that ultimately what people will say is, “I felt good about doing business with Dan.”

WashingtonExec: Who are your hero’s?

Dan Frank: It might be cliché to say this, but first of all my father. My dad was an immigrant from Germany who arrived poor and ended up helping found the modern software industry. It’s the classic immigrant story from the Greatest Generation but he was a self-made guy and I have so much respect for that. He was also a Vetrepreneur who got his training in early computers in the Army and turned that knowledge into a career as a founder of one of the first independent software vendors (Informatics, Inc). He lived the American dream and was a great father to boot. I only hope that I can live up to the example he set as an entrepreneur and as a father.

Ernest Shackleton would be another hero because of his extraordinary leadership skills. When I think about what it must have taken to keep the crew of the Endurance not only alive but also together as a cohesive unit during their long ordeal I marvel at what a tremendous and inspiring leader he must have been. He brought order out of chaos, a feat I fortunately have not had to attempt to replicate. I do try to emulate his people-centered approach to management, though, and to portray the same sense of calm steadiness to the people I lead.