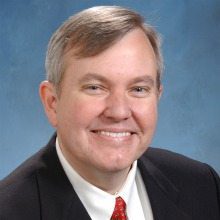 Meet Richard White, a Harris Corporation employee through and through. White is now the Harris Vice President of Advanced Information Solutions in Tysons Corner, which he joined after graduate school because, “it was cool work in a warm climate.” WashingtonExec asked White what areas he thought Harris Corporation would be expanding; including computer forensics and digital signage. We also asked White what his best piece of advice is as well as how professional cybersecurity ties into personal cybersecurity.

WashingtonExec: What brought you to Harris Corporation?

Richard White: I started at Harris Corporation after earning my Masters in Mechanical Engineering at Purdue.  Harris was looking for folks to work on unfurlable space borne reflectors on Florida’s Space Coast.  After grad school in the Indiana winters, you could say it was the cool work in a warm climate that appealed to me.  What’s kept me at Harris Corporation is the same thing that consistently gets us ranked as one of the best places to work.  We are still doing cool work, but now we do it in 150 countries around the world.

WashingtonExec: What are some future plans for Harris Corporation?

Richard White: Harris Corporation has a 116 year history of leveraging its deep bench of engineers and scientist to provide advanced solutions to our client’s most challenging technological needs.  Today, we’re firmly committed to continuing to serve our many clients in the intelligence, defense and civil government sectors.  We are also now addressing new markets, internationally and domestically, in cloud computing, computer forensics, healthcare IT, satellite communications and digital signage.  I’ve been with Harris nearly 30 years and I can say that our future has never looked brighter.

WashingtonExec: Harris Corporation is a top government contractor and frequently receives press, is there something about the company that you think is sometimes not highlighted but should be?

White: While we have thousands of Harris employees in the Washington, DC region, we are a Florida based company so sometimes we get overlooked by the DC based media who like to focus more on Corporations that are locally Headquartered.  I think the most significant untold story is that most people’s lives are touched by Harris technology in some way nearly every day, and they don’t even know it.   When you get on a plane, Harris technology is providing the FAA with the telecommunications infrastructure that allows controllers to communicate voice clearances with pilots and provides data, radar and weather to users within the FAA.  When you check the weather, you’re probably looking at weather information from weather experts made possible by Harris technology.  When you turn on a TV or radio, the content is very likely managed by or running on Harris broadcast equipment.  We have lots of other examples available on our website at www.harris.com.

WashingtonExec: Cyber security and cyber hacking are steadily in the news, why is cyber security important for companies, the government or American families?

White: We all should care about cyber security because it costs citizens and corporations billions of dollars annually in theft and lost productivity and in a worst case scenario can have dire consequences on our public safety and national security.  We all have a role to play to protect cyber space and we need to take that role seriously.  There are no bystanders in cyberspace.  If you practice bad security on your home or office system by not updating or using virus protections, visiting unsafe sites, forwarding materials and attachments that may have malicious code embedded, then you are potentially as much a threat to cyber security as the criminal writing the malicious code.

WashingtonExec: What is the best piece of advice you have ever received?

White: Besides buy low and sell high, I was told when I was a junior engineer that the one thing you truly own is your signature.  So if you are putting your name on something make sure it is the best it can be.