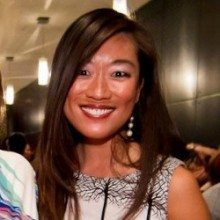 Feasting on the who, what and where of DC wasn’t as sweet until Pamela Sorensen arrived on the social – and social networking – scene. About four years ago she began the blog pamelaspunch.com to update her growing fan base about the latest social, professional, and philanthropic scenes. Since then her following has grown immensely and Pamela’s Punch has become a household name.

After earning a bachelors degree in speech communications, Sorensen began working in sales and business development. Eventually she became involved with several charities including the Red Cross of the National Capital Area, the Northern Virginia Technology Council and CharityWorks, and was seemingly always plugging one event or another. She also became connected with magazines like DC Modern Luxury, Capitol File, DC Style and Washington Life and attended many openings, screenings and parties.

After being inundated by family and friends asking her who she saw and what she did, the logical step was to begin a blog to answer those questions. Then it was only a matter of time before Sorensen made the ultimate leap of faith and quit her job in business to take to the bolgosphere full time.

But Sorensen’s move to roll with the punches was well worth it. Since its launch, the website – along with the Punch brand – has grown tremendously, and now includes online, social and live media assets, as well as a team of correspondents. And, Pamela’s Punch will attempt to conquer the west coast this year, with its eyes on shiny Hollywood and the Los Angeles market.

“As the executive Director of a fast growing non profit, Pamela has played an integral role in shaping our identity, and changing the way social media can be used both on the ground and on the internet.  She is a savy business women, and has helped transform people’s lives through her writing on Pamela’s Punch.” -Michael Sapienza, Director of Chris 4 Life.