Founder of Wikipedia Speaks at Georgetown 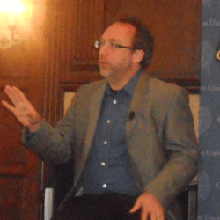 Ten years ago Jimmy Wales embarked on what he called the “world’s most collaborative experiment” – constructing Wikipedia. While it might have sounded like a “completely crazy” idea, the site now sees 408 million users each month and boasts 16 million entries in more than 200 different languages.

The massive – and still growing – encyclopedia depends on users to edit and post its content. So while the vast majority of editors mean well, there are, at times, those who are “testing” Wikipedia and others who flat out vandalize the site.

Having a deep-seeded background in civil online etiquette Wales, along with Andrea Weckerle, the creator of CiviliNation, held the event “The Need for Civil Discourse” at Georgetown University on Monday.

The two outlined what an ideal online community would consist of and ways to achieve it. Wales said his rule is “what kind of behavior would you have in your home.” Both Weckerle and Wales said a key in achieving civil digital communication is the bystander. Weckerle said bystanders have several choices when the encounter trolling or cyberbullying, including sending the victim or attacker a private message, which, has worked to settle disputes.

But before the interaction reaches bullying, Weckerle listed preventative measures people could take to minimize their risk of being targeted. As New York Congressman Anthony Weiner recently demonstrated, “think before you send” is a good rule to bear in mind. Also, Weckerle mentioned “there really is such a thing as too much information,” as future employers could eventually see those embarrassing Facebook posts and photos.

Ideally there would be no need for these measures, however, as Wikipedia can vouch, there are vandals out there.

“We see this kind of trolling behavior all the time and I think we’ve dealt with it quite successfully,” Wales said.

The online community tends works in Wales’ favor most of the time, as vandalized posts are usually reversed “very, very quickly.” The encyclopedia site also blocks chronic abusers from editing, in order to curb vandalism.

“We’ve put in software tools so that speech can be healthy and move us forward,” he said.

But, for the most part, Wikipedia needs its editors in order to continue its sprawl. Wales said eliminating anonymity on his site would be detrimental to his contributions. And most of the edits are harmless corrections of typos and the like.

Ultimately, having civil online discourse will allow for everyone to utilize the Internet as a learning tool, Wales said.