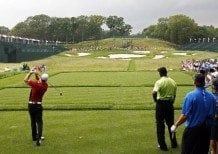 The United States Golf Association (USGA) received 8,300 applications for the 2011 U.S. Open from both professional and amateur golfers.  This overwhelming number was most likely due to the fact that the USGA switched from paper applications to online.  The 11th annual U.S. Open Championship will be hosted at the Congressional Country Club in Bethesda, Md.

Because of the large amount of applications, the USGA saw a variety of golfers.  Most hail from all 50 states, but 752 applicants are from foreign countries.  Also, nine of the applicants are previous U.S. Open Champions looking to go for a second win. The amateur golfers better bring their best game because 65 professional golfers will be joining the tournament.

To wean down the number of applicants, there is a qualification process that includes two rounds of golf play.  The first qualifying round, which will occur May 6-19, is a play of 18 holes. Players who golf a specific qualifying score will move on to the next round.  The second round, called the sectional qualifier, is a play of 36 holes to a minimum score.

After these qualifying trials, the remaining golfers will continue on to the U.S. Open Championship.  The tournament will be hosted on June 16-19.