You are at:Home»Execs to Know»Meet Aneesh Chopra 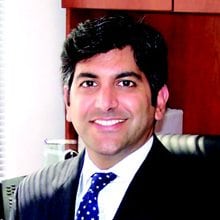 When President Barack Obama’s team first moved into the White House back in 2009, they encountered one of their biggest challenges almost immediately.

The team, fresh off a campaign heavily reliant on the latest technology and social media-savvy, found themselves confronted with government offices lacking in the very basics.

“Obama officials ran smack into the constraints of the federal bureaucracy yesterday, encountering a jumble of disconnected phone lines, old computer software, and security regulations forbidding outside e-mail accounts,” wrote Anne E. Kornblut in The Washington Post. “No Facebook to communicate with supporters. No outside e-mail log-ins. No instant messaging. Hard adjustments for a staff that helped sweep Obama to power through, among other things, relentless online social networking.”

“It is kind of like going from an Xbox to an Atari,” complained Bill Burton, an Obama spokesman at the time.

Tasked with updating the federal system was Aneesh Chopra, whom Obama named “Chief Technology Officer.” Chopra had previously been Virgina’s secretary of technology before Obama hired him. During his four years in Richmond, Chopra developed a modern website for Virginia, utilizing social-networking tools as ubiquitous as Facebook and as niche as Ning.

A graduate of Johns Hopkins and Harvard, Chopra’s primary goals include implementing reforms similar to his work in Virginia on a national scale, and increasing high-speed Internet access throughout the United States. (A goal Obama highlighted in his State of the Union address this year.)

Chopra, whose father immigrated to the United States from the “middle of nowhere” India, has also said he wants new technology in the US to promote innovation.

“There’s never been a better time to be an innovator,” Chopra told a conference in Omaha last week. “We’re taking an all-hands-on-deck approach.”