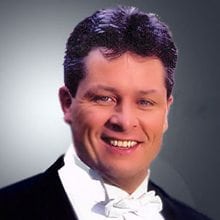 CharityWorks’ private wine tasting in Warrenton, Virginia, got an extra perk last week with a performance by Anthony Kearns, a singer with a “thrilling” voice.

The event, an invitation-only “Best of the Best” 100 point vintage wine tasting, was run by CharityWorks to raise funds for Live It Learn It and Thanks USA, two local charity groups. The approximately 180 guests raised a total of $1 million–a favorable reception helped in no small part to Kearns’ singing.

Kearns flew in from Dublin to serenade the party. He is preparing to play Don Ottavio in Ireland next week, in a performance of Mozart’s Don Giovanni.

This is not Kearns’ first foray into charity work. His group, The Irish Tenors, recently worked with Virginia Governor Bob McDonnell to do a benefit concert for ThanksUSA, raising money towards scholarships for military families.